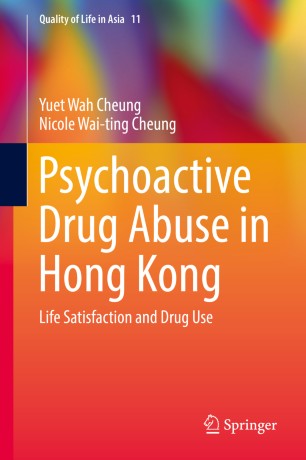 Life Satisfaction and Drug Use

Part of the Quality of Life in Asia book series (QLAS, volume 11)

This book studies young people’s use of psychoactive drugs and its social and psychological correlates in Hong Kong. Specifically, it focuses on how life satisfaction may affect drug use among a sample of psychoactive drug users in Hong Kong. The book addresses the dearth of research on the role of young people’s life satisfaction in their drug abuse and engagement in other risk behaviors in Hong Kong. It also examines how changes in the drug scene from heroin addiction to psychoactive party drug use since the late 1990s has necessitated a deeper exploration of the subculture of young people, which shapes their attitudes and behaviors regarding how they structure their lives and how they perceive the risks of drug use, in the context of the global trend of normalization of recreational drug use.

Readers will benefit from the results of a rigorous analysis of a unique set of longitudinal data that reveals the factors influencing drug use among young psychoactive drug users, academic implications of the findings for social science theory and research on young people’s drug use, and practical implications of the findings for prevention and intervention services for young people in Hong Kong and other Asian societies.

Yuet Wah Cheung is currently Distinguished Professor and Head of the Department of Sociology, Hong Kong Shue Yan University. Before joining Shue Yan University in 2016, he had taught in the Department of Sociology at The Chinese University of Hong Kong since 1984, and served as Chairman of the department from 2009 to 2016. He specializes in deviance, drug policy, and medical sociology. Since 1992, he has been studying drug abuse and drug policy in Hong Kong. Among his publications is a book written on the basis of a pioneer longitudinal study of adult chronic drug abusers (mainly heroin addicts) in Hong Kong conducted from 2000 to 2002 (A Brighter Side: Protective and Risk Factors in the Rehabilitation of Chronic Drug Abusers in Hong Kong, Hong Kong: The Chinese University Press, 2009). Almost ten years later he conducted another longitudinal study of drug abusers, this time young psychoactive drug abusers, from 2009 to 2012. This book on young psychoactive drug abusers, together with his previous book on chronic drug abusers, document and compare the changes in the drug abuse pattern in Hong Kong over two generations of drug abusers. He has published in Drug Use and Misuse, International Journal of Drug Policy, Canadian Medical Association Journal, Violence and Victims, Journal of Marriage and Family, Social Science and Medicine, Journal of Youth and Adolescence, Social Indicators Research, Small Group Research, and other peer-reviewed journals.

Nicole Wai-ting Cheung is an Associate Professor in the Department of Sociology, The Chinese University of Hong Kong.  She specializes in sociological theories of deviance, addiction, youth transition, and migration-related deviance, victimization and health risks.  Her research on substance abuse focuses on the normalization of adolescent recreational drug use within non-Western cultural contexts.  In recent years, she has extended her research focus from substance abuse to gambling disorder.  She also conducts research on victimization, social stress, risk behaviors and mental health among youngsters in the context of massive rural-urban migration in mainland China.  Her publications appear in Social Science & Medicine, Health & Place, Addictive Behaviors, Youth & Society, Journal of Gambling Studies, Journal of Youth and Adolescence, and Sociological Perspectives.