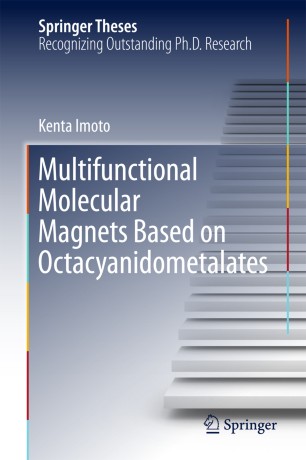 Multifunctional Molecular Magnets Based on Octacyanidometalates

This thesis demonstrates the novel magnetic functionalities in cyanido-bridged metal assemblies, and as such appeals to readers in the field of materials science. The utilization of octacyanidometalates as building blocks enables the observation of (i) photo-induced magnetization due to a light-induced spin-crossover in an iron octacyanidoniobate-based assembly, (ii) photo-induced magnetization with a two-step spin-crossover behavior in an iron octacyanidoniobate-based material, and (iii) the coexistence of super-ionic conductivity and metamagnetism in a manganese-octacyanoniobate system. These multi-functionalities are achieved by incorporating a spin-crossover moiety or a hydrogen-bonding network into a cyanido-bridged network structure with a strong magnetic interaction. In particular, in light-induced spin-crossover magnets, a magnetically non-ordered state can be altered to a magnetically ordered state by photo-irradiation, which is one of the attractive mechanisms for novel optical switching devices.