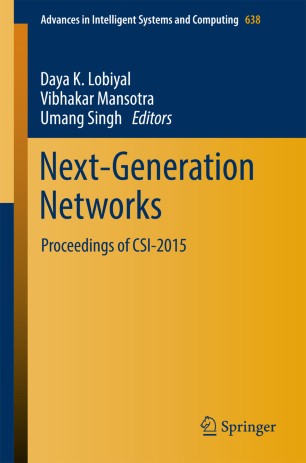 Part of the Advances in Intelligent Systems and Computing book series (AISC, volume 638)

This book comprises select proceedings of the 2015 annual conference of the Computer Society of India. The books focuses on next generation networks (NGN). An NGN is a packet-based network which can provide services including telecommunication services. NGNs make use of multiple broadband, quality-of-service-enabled transport technologies in which service-related functions are independent from underlying transport-related technologies. This volume includes contributions from experts on various aspects of NGNs. The papers included cover theory, methodology and applications of ad-hoc networks, sensor networks, and the internet. The contents also delve into how the new enterprise IT landscape of cloud services, mobility, social media usage and big data analytics creates different types of network traffic to the traditional mix of in-house client-server enterprise workloads. The contents of this book will be useful to researchers and professionals alike.

Prof. Vibhakar Mansotra did his Masters in Physics in 1986 and M.Phil. Crystal Growth (Physics) in 1988 and also one-year PGDCA in 1990. After completing his M.Phil. and PGDCA he Joined the Department of Computer Science

and IT, University of Jammu as Ad hoc Lecturer in the year 1991 (February) and later got confirmed in the same Department in the year 1992 (October). In the year 1997, he went to the Indian Institute of Technology Delhi (IIT Delhi) for completing his M.Tech. Computer Science and completed the same in December 1998. After acquiring his M.Tech. degree from IIT Delhi, he took over as Head of the Department in April 2012 and remained in this position for three years up to April 2015. During his tenure as the Head of the Department, he contributed a lot to the growth of his Department and brought the Department on the national map as one of the best Departments in the country. During his tenure as Head he also started an M.Tech. programme in Computer Science in the Department, thereby bringing more laurels to the Department at the national level. During his tenure as Head he got the Best Teacher Award in Information Technology (IT) by Amar Ujala B-School Excellence Awards held in Bombay on 23rd November 2012 and also the Best Professor Award in Information Technology (IT) by LOKMAT National Education Leadership Awards held in Bombay on 13th February 2015. Besides his teaching achievements he has contributed extremely well to the design of new courses and programmes and has earned a name in his region. He has remained an active member of various academic bodies of the University and various neighbouring universities.

Dr. Umang, IBM RAD Certified “Associate Developer,” has completed her doctorate from University School of Information, Communications & Technology Department, Guru Gobind Singh Indraprastha University (GGSIPU), Delhi. Currently, Dr. Umang is working as an Assistant Professor at the Institute of Technology and Science, Ghaziabad, UP and has experience of more than 12 yrs in academics. She is an active researcher having interest in the area of Mobile Ad hoc Networks, Sensor Networks, Vehicular Ad hoc Networks (VANETs), Software Management and Software Engineering. She is guiding M.Tech./ Ph.D. students of various reputed universities. She has organized various conferences/seminars and faculty development programmes and has also worked as Editor and Joint Editor in Journals and Conferences. She has also authored a book titled “Real Time System” and co-authored the title “MCA IV Handbook” published by Pragati Publication, Meerut (UP). She is an active member of various societies and professional bodies including IEEE and a life member of the Computer Society of India (CSI). She has delivered lecture talks on the area of Information security, Mobile communications, Vehicular networks, Sensor networks, Ad hoc networks and its implementation in ns2. She has more than 40 research papers in esteemed national/international conferences and journals including ACM, IEEE, IET credited to her name and is also a reviewer of national/international journals.