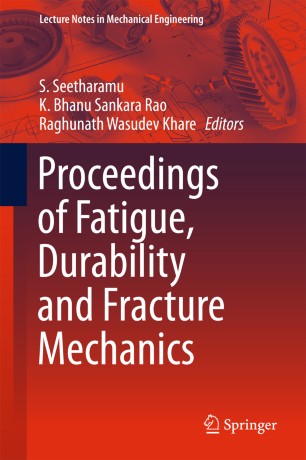 This book presents the proceedings of Fatigue Durability India 2016, which was held on September 28–30 at J N Tata Auditorium, Indian Institute of Science, Bangalore. This 2nd International Conference & Exhibition brought international industrial experts and academics together on a single platform to facilitate the exchange of ideas and advances in the field of fatigue, durability and fracture mechanics and its applications. This book comprises articles on a broad spectrum of topics from design, engineering, testing and computational evaluation of components and systems for fatigue, durability, and fracture mechanics. The topics covered include interdisciplinary discussions on working aspects related to materials testing, evaluation of damage, nondestructive testing (NDT), failure analysis, finite element modeling (FEM) analysis, fatigue and fracture, processing, performance, and reliability. The contents of this book will appeal not only to academic researchers, but also to design engineers, failure analysts, maintenance engineers, certification personnel, and R&D professionals involved in a wide variety of industries.

Dr. K. Bhanu Sankara Rao FASM, FNAE, FIIM, FASc, formerly served as Head, Mechanical Metallurgy Division at the Indira Gandhi Centre for Atomic Research, Kalpakkam. Presently he is a Ministry of Steel Chair Professor in the Mahatma Gandhi Institute of Technology, Hyderabad. He has received his B.E degree (Metallurgy) from Visvesvaraya Regional College of Engineering, Nagpur, M.Tech (Physical Metallurgy) from the Indian Institute of Technology Bombay (IIT Bombay) and Ph.D (Metallurgical Engineering) from University of Madras. His current research interests are Mechanical Metallurgy, Physical Metallurgy, Welding Science and Technology and Powder Metallurgy. He has published 250 research papers. He has been serving as an Editor of International Materials Reviews, International Review Board Member of Metallurgical and Materials Transactions and Materials Engineering and Performance since 1995. He is a member of the Technical Books Committee of ASM International. He has been the recipient of the Best Metallurgist Award from the Ministry of Steel (1995), MRSI Medal (1997), NASA Appreciation (1994), Binani Gold Medal of IIM (1990), SAIL Gold Medal (Certificate of Merit) of IIM (2000), I.T. Mirchandani (1990), H.D. Govindaraj (1990), Nucor (1996), and D&H Schechron (1994) Awards of the Indian Institute of Welding. He has served as National Research Council Fellow of USA at the NASA Lewis Research Centre, Cleveland and as a Guest Scientist at Nuclear Research Centre, Juelich, Germany and University of Siegen, Germany.

Dr. S. Seetharamu received his Ph.D. in Mechanical Engineering from the Indian Institute of Science (IISc) in 1982 after obtaining his M.E. in Mechanical Engineering from IISc in 1976 and B.E. in Mechanical Engineering from Bangalore University in 1974. Dr. S. Seetharamu worked in Central Power Research Institute (CPRI) since 1985 and retired as Director in June 2015. Energy Technology and Materials Engineering are his areas of interest and special thrust is towards management of coordination with the professional working teams for collaborations, accreditations as well as custom-specific training programmes. He has worked in the Industry and has also served as a Faculty at Toyohashi University of Technology, Japan. Dr. S. Seetharamu is a leading Scientist in the Central Power Research Institute which is contributing towards the development of Electrical Industry in India. He is the recipient of several awards, holder of many patents, and a member of multiple professional bodies.

Dr. Raghunath Wasudev Khare has 35+ years of experience in Finite Element Method, Materials, Metallurgy, Fatigue and Failure Assessment. He holds his Master’s and Doctorate from the Department of Mechanical Engineering, Indian Institute of Science, Bangalore. Dr. Raghunath Khare started his career with the Foundry and Forge Division of Hindustan Aeronautics Limited and later worked with various organisations as a Material & Failure Expert. He is the lead auditor for the failure investigations projects from Central Power Research Institute [CPRI] and Triveni Turbines, DHIO Research and Engineering Pvt Ltd., and so on. He has solved various industrial failure cases ranging from auto, aero and power plant companies. Dr. Raghunath Khare currently heads the Institute of Structural Integrity and Failure Studies [ISIFS],  consortium of experts with decades of experience in solving the real-time industrial – fatigue, fracture, failure problems associated with design, engineering, material, process related with insight of theoretical, analytical, experimental and computational simulation knowledge.