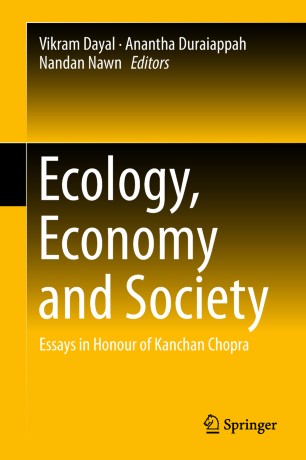 Essays in Honour of Kanchan Chopra

This book deals with not just complex linkages, interactions and exchanges that form the relationship between the economic activities, human society and the ecosystems, but also the influences and impacts that each causes on the other. In recent times, this ecology–economy–society interface has received unprecedented attention within the broader environment–development discourse. The volume is in honour of Kanchan Chopra, one of the pioneers of research in these areas in India. She has recently been awarded the coveted Kenneth Boulding Award by the International Society for Ecological Economics (ISEE) and is the first Asian to receive it.

The four sub-themes of the book reflect some of the important areas in the environment–development discourse — sustainability of development, institutions and environmental governance, environment and well-being, and ecosystem and conservation. Within each of the sub-themes, the policy and the practice as well as the macro and micro aspects are addressed. With contributions mainly from ecological economists and ecologists, the book’s approach is interdisciplinary, both in spirit and content, reflecting the honoree's work, which went not just beyond the mainstream ideology of economics, but also the way she listened to ideas from disciplines like ecology and sociology. The volume also includes two reflective essays on academic life and works of Kanchan Chopra.

Vikram Dayal is a Professor at the Institute of Economic Growth, Delhi, India. He is the author of a few books and co-editor of the Oxford Handbook of Environmental Economics in India with Kanchan Chopra. His research on a range of environmental and developmental issues from outdoor and indoor air pollution in the Indian state of Goa to tigers and Prosopis juliflora in Ranthambhore National Park (Rajasthan, India) has been published in a variety of journals. He visited the Workshop in Political Theory and Policy Analysis in Bloomington, Indiana as a SANDEE (South Asian Network for Development and Environmental Economics) Partha Dasgupta Fellow in 2011. He studied economics in India and the USA and received his doctoral degree from the University of Delhi.

Anantha Duraiappah is the Director of Mahatma Gandhi Institute of Education for Peace and Sustainable Development, New Delhi. He is an experienced environment–development economist with more than three decades of international experience. From 2010 to 2014, he was the Executive Director of International Human Dimensions Programme (IHDP) hosted by the United Nations University (UNU), Bonn, Germany. While at UNU he was the founding director of the highly acclaimed Inclusive Wealth Report (IWR) launched at the Rio+20 summit in Rio in 2012. From 2006 to 2010 he was the Chief of the Ecosystem Services and Economics Unit of the United Nations Environmental Programme (UNEP) in Nairobi, Kenya and was responsible for initiating the establishment of the intergovernmental science–policy platform on Biodiversity and Ecosystem services (IPBES). Prior to joining the UN, he worked as an academic in universities in Singapore, Italy, and the Netherlands. He received his PhD in Economics from the University of Texas in Austin, USA. He is currently working to enable UNESCO to achieve the transformative shift in education envisioned for the post-2015 agenda.

Nandan Nawn is an Associate Professor at and Head of Department of Policy Studies, TERI University, New Delhi, where he teaches various courses in the interface of environment, development and economics. He is an economist by disciplinary training with a doctoral degree from Jawaharlal Nehru University, New Delhi. His research interests lie in ecological economics, agrarian studies and environment and development. His works has been published in various journals including Journal of Agrarian Change, Economic and Political Weekly and Journal of Human development and Capabilities. He has recently co-edited Economic Challenges for the Contemporary World: Essays in Honour of Prabhat Patnaik (Sage Publications) and Global Change, Ecosystems, Sustainability: Theory, Methods, Practice (forthcoming, Sage Publications). He is a co-editor of “Review of Environment and Development” in EPW and Secretary of the Indian Society for Ecological Economics.