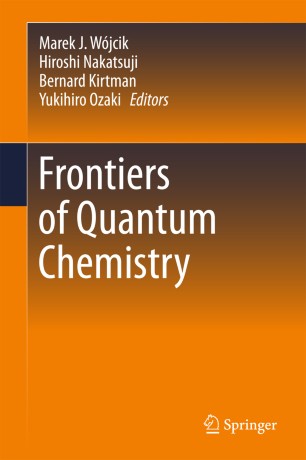 The purpose of this book is to convey to the worldwide scientific community the rapid and enthusiastic progress of state-of-the-art quantum chemistry. Quantum chemistry continues to grow with remarkable success particularly due to rapid progress in supercomputers. The usefulness of quantum chemistry is almost limitless. Its application covers not only physical chemistry but also organic and inorganic chemistry, physics, and life sciences. This book deals with all of these topics.

Frontiers of Quantum Chemistry is closely related to the symposium of the same name held at Kwansei Gakuin University at Nishinomiya, Japan, in November 2015. The book's contributors, however, include not only invited speakers at the symposium but also many other distinguished scientists from wide areas of quantum chemistry around the world.

He received Chevalier Cross of the Order of Rebirth of Poland.

Professor Hiroshi Nakatsuji received his Ph.D. from Kyoto University. He completed two years of postdoctoral studies at Yeshiva University, New York and University of North Carolina. From 1990 he was professor at the Graduate School of Engineering, Kyoto University. In 2004 - 2006 he was Director of the Fukui Institute for Fundamental Chemistry and from 2006 he is Director of the Quantum Chemistry Research Institute in Kyoto.

His important contributions include General Methods of Solving the Schrödinger and Dirac Equations, SAC-CI Theory for Molecular Excited and Ionized States, Dipped Adcluster Model for Surface-Molecule Interactions and Reactions, Theory for the Direct Determination of Density Matrix, Intuitive Force Concept for Molecular Geometry and Chemical Reaction and Electronic Mechanism and Relativistic Effect in NMR Chemical Shifts.

He received several awards, such as CSJ Award, Fukui Medal and Senior CMOA Medal. He is General Secretary of the International Academy Quantum Molecular Science.

He is internationally well known for his highly cited work in electronic structure theory and computational methods, as well as studies of molecular electronic/vibrational and nonlinear optical properties along with the vector potential approach for the computation of such properties in periodic systems.

He has received the UCSB Academic Senate Distinguished Teaching Award and the ICCMSE Award for Theoretical/Computational Chemistry. An international symposium honoring his scientific contributions was held in Rhodes, Greece in 2009. Professor Kirtman is also a coauthor of the monograph "Calculations on Nonlinear Optical Properties of Large Systems" published by Springer.

Professor Yukihiro Ozaki received his Ph.D. from Osaka University. He spent for two years and a half at National Research Council, Canada as a research associate. He joined Kwansei Gakuin University in 1989, where he is a professor in the Department of Chemistry.

He received several international awards such as the Tomas Hirschfield Award, Gerald Birth Award and Bomen-Michelson Award. He is also a coeditor of the book "Far- and Deep- Ultraviolet Spectroscopy" published by Springer.