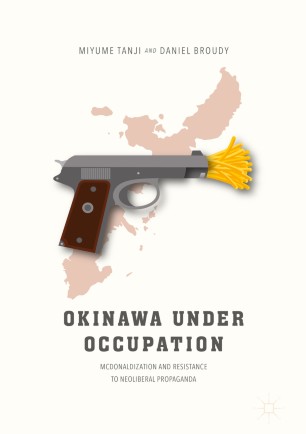 McDonaldization and Resistance to Neoliberal Propaganda

This book examines classical and modern interpretations of education in the context of contemporary Okinawa as a site of neoliberal military-industrial development. Considering how media educate consumers to accept the plans and policies of the powerful, it questions current concepts of development and the ideology that informs national security policies. The book closely examines the signs, symbols, and rhetorical manipulations of language used in media to rationalize and justify a kind of development, which is the destruction of the environment in Henoko. Through careful analysis of public relations literature and public discourse, it challenges the presupposition that Okinawa is the Keystone of the Pacific and necessarily the only location in Japan to host U.S. military presence. Forced to co-operate in America’s military hegemony and global war-fighting action, Okinawa is at the very center of the growing tension between Beijing and Washington and its clients in Tokyo and Seoul. The book represents a case study of the discourse used in society to wield control over this larger project, which is a more developed and militarized Okinawa . Considering how history is given shape through external power structures and discourse practices that seek control over both historical and contemporary narratives, it reveals how public attitudes and perceptions are shaped through educational policies and media.

Miyume Tanji (Ph.D. in politics) is an honorary lecturer at the Australian National University. Miyume has written about social movements in Okinawa, and is the author of ‘Myth, Protest and Struggle in Okinawa’ (2006). Miyume has been a guest editor of Amerasia Journal’s special issue on ‘Indigenous Asias’ (volume 41, 2015), and contributed articles to academic journals such as Critical Asian Studies, Japan Focus: the Asia-Pacific Journal, and Asian Studies Review.

Daniel Broudy is Chair of the Graduate School of Intercultural Communication and Professor of Rhetoric and Applied Linguistics at Okinawa Christian University, Japan. He holds a Ph.D. in applied psycholinguistics from Deakin University and an M.A. in rhetoric from Norwich University. His research activities include analysis of textual and symbolic representations of power that dominate post-industrial culture.

“Through a thoughtful presentation of post-WWII history and contemporary events, the authors describe and critically examine ongoing issues of the U.S. military base presence in Okinawa from an original perspective and within a novel analytical framework. The questions that arise from their wide-ranging in-depth analysis, however, are directed toward us Okinawans and should engender serious engagement.” (Hideki Yoshika, Synaesthesia: Communication across Cultures, 2018)