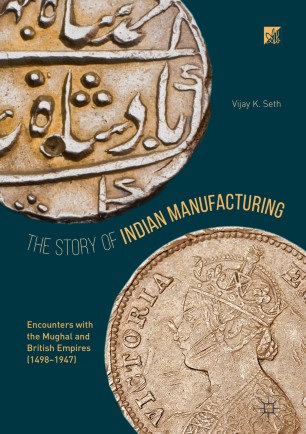 The Story of Indian Manufacturing

This book discusses the role historical events played in determining the pattern of growth of Indian manufacturing. Two important historical events significantly influenced the course of Indian manufacturing from the 15th century AD. The first was the arrival of European merchants via sea route pioneered by Vasco-da-Gamma in 1498 and the other was the dawn of the Mughal Empire in 1526. The book explores how these two events provided the appropriate stimulus for the emergence of traditional flexible manufacturing in India and how they played a vital role in the pattern of growth of the Indian manufacturing: The Mughal Empire created an integrated economy of continental size whereas European trading companies expanded the commercial connectivity of the Indian economy and South East Asia. It further investigates how the circumstances created by the colonial administration, factor endowment and market conditions created the complex forms of manufacturing enterprises that India inherited at the time of independence. It is a valuable resource for students of history, economic history, business history and the history of technology.

Vijay K. Seth is a former professor of the Faculty of Management Studies, University of Delhi and International Management Institute, New Delhi, India. He is founding editor of journal Emerging Economy Studies, published by SAGE Publications.