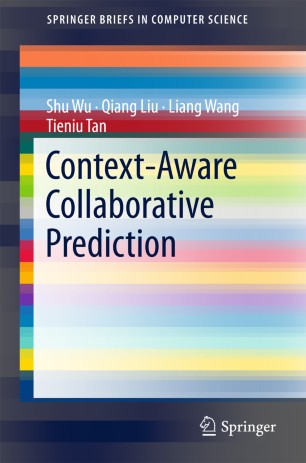 The book offers a rich blend of theory and practice, making it a valuable resource for students, researchers and practitioners who need to construct systems of information retrieval, data mining and recommendation systems with contextual information.

Shu Wu received his B.S. degree from Hunan University, China, in 2004, M.S. degree from Xiamen University, China, in 2007, and his Ph.D. degree from Department of Computer Science, University of Sherbrooke, Quebec, Canada, all in computer science. He is an Associate Professor in Center for Research on Intelligent Perception and Computing (CRIPAC) at National Laboratory of Pattern Recognition (NLPR), Institute of Automation, Chinese Academy of Sciences (CASIA). He has published more than 20 papers in the areas of data mining and information retrieval at international journals and conferences, such as IEEE TKDE, IEEE THMS, AAAI, ICDM, SIGIR, and CIKM. His research interests include data mining, information retrieval and recommendation systems.

Qiang Liu received his B.S. degree in electronic science from Yanshan University, China, in 2013. He is currently working on his Ph.D. at the National Laboratory of Pattern Recognition, Institute of Automation, Chinese Academy of Sciences, Beijing, China. His research interests include machine learning, data mining and recommendation systems.

Liang Wang received both the BEng and MEng degrees from Anhui University in 1997 and 2000, respectively, and the PhD degree from the Institute of Automation, Chinese Academy of Sciences (CASIA) in 2004. From 2004 to 2010, he was a research assistant at Imperial College London, United Kingdom, and Monash University, Australia, a research fellow at the University of Melbourne, Australia, and a lecturer at the University of Bath, United Kingdom, respectively. Currently, he is a full professor of the Hundred Talents Program at the National Lab of Pattern Recognition, CASIA. His major research interests include machine learning, pattern recognition, and computer vision. He has widely published in highly ranked international journals such as IEEE Transactions on Pattern Analysis and Machine Intelligence and IEEE Transactions on Image Processing, and leading international conferences such as CVPR, ICCV, and ICDM. He is a senior member of the IEEE, and an IAPR Fellow.

Tieniu Tan received his BSc degree in electronic engineering from Xi'an Jiaotong University, China, in 1984, and his MSc and PhD degrees in electronic engineering from Imperial College London, U.K., in 1986 and 1989, respectively. In October 1989, he joined the Computational Vision Group at the Department of Computer Science, The University of Reading, Reading, U.K., where he worked as a Research Fellow, Senior Research Fellow and Lecturer. In January 1998, he returned to China to join the National Laboratory of Pattern Recognition (NLPR), Institute of Automation of the Chinese Academy of Sciences (CAS), Beijing, China, where he is currently Professor and former director (1998-2013) of the NLPR and Center for Research on Intelligent Perception and Computing (CRIPAC), and was Director General of the Institute (2000-2007). He was also Vice President of the Chinese Academy of Sciences (2015-2016). His current research interests include biometrics, image and video understanding, and information content security.