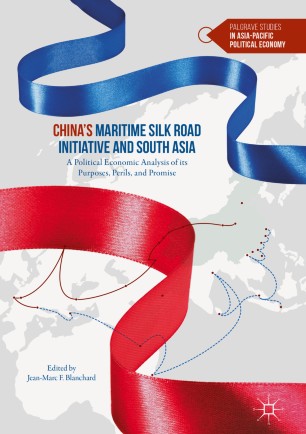 A Political Economic Analysis of its Purposes, Perils, and Promise

This book brings together a diverse range of responses to China's Marine Silk Road Initiative, which proposes to redraw the map of Asia, particularly South Asia. China’s 21st Century Maritime Silk Road Initiative (MSRI) is a massive scheme to connect wide swaths of East, Southeast, South, and West Asia through a dense web of interconnected hard and soft infrastructure involving ports, roads, logistics facilities, special industrial zones, and free trade and investment agreements. This book consists of eight chapters specially commissioned for this project and selected from a number of papers presented at “The Political Economy of China’s Maritime Silk Road Initiative and South Asia” conference that was held in Shanghai in November 2015.  This book will be invaluable for students of Chinese foreign security and foreign economic policy, those interested in South Asia including Indian foreign security and economic policy as well as Indian relations with China, those attentive to international economic developments in East and South Asia, and those interested in the political and economic situation in specific MSRI participant countries such as Pakistan, Maldives, and Sri Lanka as well as their political and economic relations with China.

“This volume does a good job of creating an analytical framework to understand the MSRI at a point that we should still consider as early days. … The editor and contributors strike a difficult balance: their analysis, while not excessively theoretical, looks beyond the immediate headlines. As such, it is a useful book with both academic rigour and policy relevance.” (Jonathan Fulton, China Report, Vol. 55 (2), 2019)
Buy options