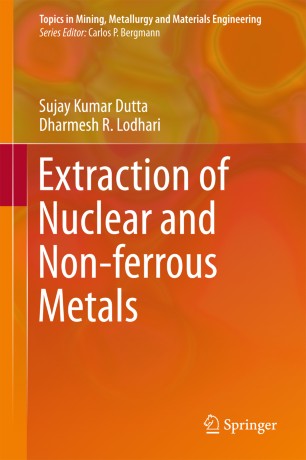 Extraction of Nuclear and Non-ferrous Metals

This book presents a comprehensive overview of non-ferrous metallurgy, especially its core principles and fundamental aspects, in a concise form. The book covers all basic concepts and definitions related to metal extraction, and provide succinct summaries of relevant metallurgical processes. It also covers the scientific and engineering aspects of nuclear processes and features special chapter on ultra-high-purity metals.  The book employs a step-by-step approach, is written in an easy-to-understand style, and discusses significance of core concepts. As such, it not only offers a valuable guide for professionals and researchers working in the areas of metallurgy, mining, and chemical engineering, but can also be used as a core text in both graduate and professional coursework.

Prof. Dutta has published three books along with other authors: (i) "Metallurgical Thermodynamics, Kinetics and Numericals" (2011), (ii) "Alternate Methods of Ironmaking (Direct Reduction and Smelting Reduction Processes)" (2012), (iii) "Iron Ore–Coal/Coke Composite Pellets" (2013), and another book (iv) "Extractive Metallurgy (Processes and Applications)" is currently in publication. He has also published 120 papers in national and international journals and conference proceedings.

Mr. Dharmesh. R. Lodhari is an Assistant Professor at the Department of Metallurgical and Materials Engineering, Maharaja Sayajirao University of Baroda in Gujarat, India. He completed his Bachelor of Engineering in Metallurgy in 1996 and Master of Engineering with specialization in Materials Technology from the M. S. University of Baroda in 2000. Presently he is pursuing his Ph.D. in the field of new alloy development. He has thirteen years of teaching and research experience in the metallurgical field, and has published numerous technical papers in national and international journals.