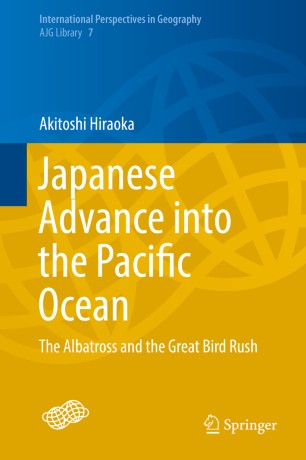 Japanese Advance into the Pacific Ocean

The Albatross and the Great Bird Rush

This book asserts that the albatross was the reason for the advance of the Japanese into the isolated islands in the Pacific after the abolition of the Japanese “closed-door” policy that had been in effect from the seventeenth century to the latter part of the nineteenth century. The birds’ plumage was of high quality and sold at quite a good price in Europe. The Japanese realized the advantage of this global trade, and their desire to capture albatross motivated them to advance into the Pacific. The exploration of the uninhabited islands had become a fast-moving trend, defined by the author as the  “Bird Rush”. As a consequence, the advance into the Pacific by the Japanese resulted in the expansion of Japanese territory. The author has interpreted this Japanese movement into the Pacific by making use of the framework of three distinct shifts: in the aim of their actions from birds to guano / phosphate ore, in the agents of action from individual speculators to commercial capital and then to monopolistic capital, and from the sea near Japan to the wider Pacific. This concept can be termed “a view of history centered on the albatross”.

Akitoshi Hiraoka is professor emeritus of Shimonoseki City University, Japan. He has been interested in the people and life on Japanese islands and those once controlled by Japan for many years. He has conducted research on these subjects that is presented in the many books he has published. In 2004, he established a study group engaged in research of “remote island regions”. As the organizer of the group, he has carried out extensive research into human geography. Professor Hiraoka has been a member of the Association of Japanese Geographers, the Human Geographical Society of Japan, the Association of Historical Geographers in Japan, and the Japan Association on Geographical Space for many years.