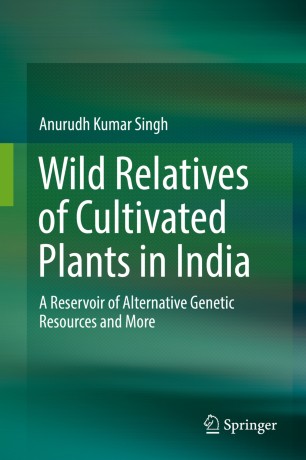 A Reservoir of Alternative Genetic Resources and More

This book provides a comprehensive overview of the wild relatives of crops and cultivated species found in India, covering their distribution, phylogenetic relationships with cultivated species, traits that are of economic and breeding value, and the perceived threats. It highlights the opportunities the wild relatives of cultivated species offer in terms of new genes and allelic variability, as well as several other exploitable economic and environmental benefits that can be harnessed with their conservation and cultivation. This helps facilitate their use – both directly and as part of the breeding program for related cultivated species, filling the gaps of genetic variability in the primary gene pool. It also discusses how they can be used in breeding programs using conventional technologies and the biotechnological approaches of recombinant DNA. Transfer of natural genes using recombinant DNA, known as “Cisgenesis,” can accelerate the process of incorporating these natural genes without genetic drag of undesirable features and biosafety concerns, and beyond taxonomic boundaries, in response to the demand for new cultivars to meet the challenges of climate change and ever-growing human population.

Dr. Anurudh K. Singh was educated at Aligarh Muslim University (1962-1966), Patna University (1969-1972), the Max Planck Institute, Koln, Germany (1986-1987), and Cornell University, Ithaca, USA (1994-1995) has been interested in the wild relatives of crop species since the beginning of his career. For his Ph.D., he worked on their collection, conservation and conducted cytogenetic studies to trace the phylogenetic relationships between wild species related to Cucurbit vegetable crop species. More significantly, from 1978-1997, while at International Crops Research Institute for the Semi-Arid Tropics (ICRISAT), he was involved in a project on utilizing wild Arachis to genetically improveme cultivated groundnut, and successfully incorporated foliar diseases resistance and other desirable traits from several wild diploid Arachis species. Later, he became involved in the collection and conservation of groundnut germplasm, including wild Arachis species. From 1998-2

008, as National Gene Bank curator and head of the Germplasm Conservation Division at the National Bureau of Plant Genetic Resources (NBPGR), New Delhi, he was responsible for the ex-situ conservation of crop germplasm with special emphasis on wild relatives of cultivated species. As member secretary of the Germplasm Registration Committee, Indian Council of Agricultural Research (ICAR), he registered a number of wild relatives of crops; and as member secretary of the Task Force for Protection of Plant Varieties and Farmers’ Rights (PPV & FR), he was involved in the identification of agrobiodiversity hotspots in India and production of the first inventory of cultivated species and their wild relatives. For these contributions he received the “The CGIAR Chairman’s Excellence in Science Award” for “Outstanding Locally Recruited Scientist” (1997). He was awarded a fellowship of The National Academy of Sciences, India (2001) and of the National Academy of Agricultural Sciences, India (2004). He has more than 210 scientific publications to his credit, including four books.

“The current book on ‘wild relatives of cultivated plants in India: a reservoir of alternative genetic resources and more’ is an intriguing description of the occurrence and distribution of around 958 wild species of cultivated plants in India … . The book will also serve as a template for documenting the occurrence and distribution of neglected and underutilized, wild crop relatives in megadiverse countries like China, Brazil, Indonesia, Malaysia, South Africa etc.” (Ajeet Singh and P. C. Abhilash, Genetic Resources and Crop Evolution, Vol. 65, 2018)​
Buy options