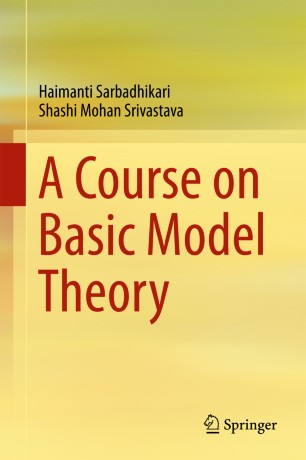 A Course on Basic Model Theory

This self-contained book is an exposition of the fundamental ideas of model theory. It presents the necessary background from logic, set theory and other topics of mathematics. Only some degree of mathematical maturity and willingness to assimilate ideas from diverse areas are required.

The book can be used for both teaching and self-study, ideally over two semesters. It is primarily aimed at graduate students in mathematical logic who want to specialise in model theory. However, the first two chapters constitute the first introduction to the subject and can be covered in one-semester course to senior undergraduate students in mathematical logic. The book is also suitable for researchers who wish to use model theory in their work.

H. SARBADHIKARI graduated from the Indian Statistical Institute, Kolkata, in 1979 under the supervision of Prof. A. Maitra. She was a Ford Foundation Fellow at the University of California, Los Angeles, in 1979, and a visiting assistant professor at the University of Illinois, Chicago, in 1980. She joined the Indian Statistical Institute, Kolkata, in 1980, as the permanent faculty and retired from the position of professor in 2010. Her primary research interest is in descriptive set theory.

S.M. SRIVASTAVA graduated from the Indian Statistical Institute, Kolkata, in 1980, under the supervision of Prof. A. Maitra. He was a member of the Institute for Advanced Studies, Princeton, during the academic year 1979-80. He joined the Indian Statistical Institute, Kolkata, in 1980, as the permanent faculty and is currently a higher academic grade professor. His primary research interest lies in descriptive set theory. He is the recipient of the Indian National Science Academy medal for young scientists. He is the author of the books A Course on Borel Sets and A Course on Mathematical Logic (both published by Springer). He is an enthusiastic teacher and has written several expository articles aimed at popularising mathematical logic and set theory in India.

“It is primarily written for graduate students in mathematical logic. … The book is written very carefully, the proofs are clear. It can be recommended to everyone interested in model theory.” (Martin Weese, zbMATH 1425.03001, 2019)
“It covers both the basic terminology and results of the discipline as well as more sophisticated results … and also provides interesting applications to other areas of mathematics, notably algebra. … An instructor of a graduate course in this topic would certainly want to give this book a look … To summarize and conclude: a useful book to have on one’s shelves … .” (Mark Hunacek, MAA Reviews, December, 2017)
Buy options