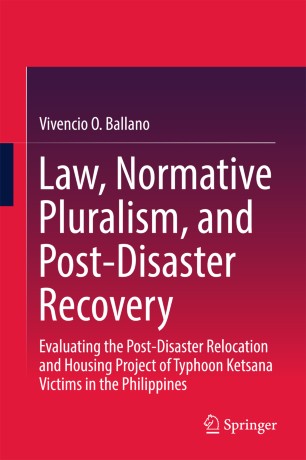 This book looks at how the multiplicity of formal and informal normative systems that administer the post-disaster recovery objectives of the Philippine Disaster Risk Reduction and Management Act of 2010 has resulted in inadequate housing and relocation as well as greater suffering to typhoon victims. Using the sociological and normative pluralist perspectives and the case study method, it evaluates the level of conformity of the government resettlement program given to Typhoon Ketsana victims to the legal standards. It highlights the complex and competing legal and cultural normative regimes of various stakeholders and public agencies, rigid regulation in the state’s real estate bureaucracy and the unscrupulous involvement of some powerful and ‘corrupt’ real estate developers and housing groups, as largely contributing to the project’s significant deviation from the law’s proactive rehabilitation goals. It aims to promote the sociological and socio-legal frameworks in post-disaster research and invites policymakers to enact a comprehensive post-disaster management law and create a one-stop disaster management agency to minimize the negative unintended effects caused by normative pluralism in post-disaster resettlement projects.

Dr. Vivencio (Ven) O. Ballano is Associate Professor V of the Sociology Department of the Polytechnic University of the Philippines (PUP) in Manila. In 2011, he obtained his doctoral degree in Sociology from the Ateneo de Manila University. He was chosen Post-Doctoral Research Fellow of the Southeast Asian Studies Research Exchange Program (SEASREP). He is the author of the book Sociological Perspectives on Media Piracy in the Philippines and Vietnam published by Springer Singapore in 2016. Dr. Ballano’s specialized areas of teaching and research include sociology of law, religion, disaster management, corporate organization, and the Catholic Social Teaching. His current projects and interests include writing monographs and articles on rumors and gossip in corporate settings and the Catholic Social Teaching, as well as doing sociological research on film piracy and illegal camcording in the Philippines.