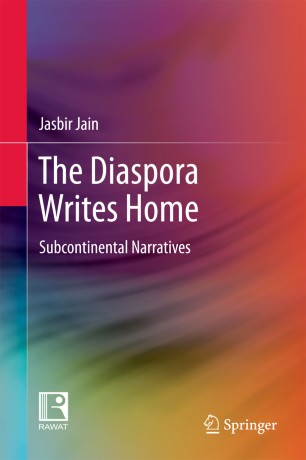 This book by eminent author Jasbir Jain explores the many ways the diaspora remembers and reflects upon the lost homeland, and their relationship with their own ancestry, history of the homeland, culture and the current political conflicts. Amongst the questions this book asks is, ‘how does the diaspora relate to their home, and what is the homeland’s relationship to the diaspora as representatives of the contemporary homeland in another country?’. The last is an interesting point of discussion since the ‘present’ of the homeland and of the diaspora cannot be equated. The transformations that new locations have brought about as migrants have travelled through time and interacted with the politics of their settled lands—Africa, Fiji, the Caribbean Islands, the UK, the US, Canada, as well as the countries created out of British India, such as Pakistan and Bangladesh—have altered their affiliations and perspectives.

This book gathers multiple dispersions of emigrant writers and artistes from South Asia across time and space to the various homelands they relate to now. The word ‘write’ is used in its multiplicity to refer to creative expression, as an inscription, as connectivity, and remembrance. Writing is also a representation and carries its own baggage of poetics and aesthetics, categories which need to be problematised vis-à-vis the writer and his/her emotional location.

Jasbir Jain is the Honorary Director of the Institute for Research in Interdisciplinary Studies (IRIS), Jaipur and was Sahitya Akademi Writer-in-Residence (2009), and Emeritus Fellow (2001–2003) both at the University of Rajasthan. Recipient of several prestigious awards and fellowships, she is an elected Life Member of Clare Hall, Cambridge and has had teaching assignments in Europe and the United States. She is the author of Theorising Resistance: Narratives in History and Politics (2012); Indigenous Roots of Feminism: Culture, Subjectivity and Agency (2011); Beyond Postcolonialism: Dreams and Realities of a Nation (2006); Gendered Realities, Human Spaces (2003); among several others. Her current interests are in theory and narratology and in exploring traditions.