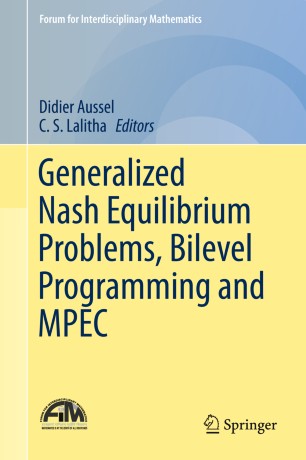 Part of the Forum for Interdisciplinary Mathematics book series (FFIM)

The book discusses three classes of problems: the generalized Nash equilibrium problems, the bilevel problems and the mathematical programming with equilibrium constraints  (MPEC). These problems interact through their mathematical analysis as well as their applications. The primary aim of the book is to present the modern tool of variational analysis and optimization, which are used to analyze these three classes of problems. All contributing authors are respected academicians, scientists and researchers from around the globe. These contributions are based on the lectures delivered by experts at CIMPA School, held at the University of Delhi, India, from 25 November–6 December 2013, and peer-reviewed by international experts.

The book contains five chapters. Chapter 1 deals with nonsmooth, nonconvex bilevel optimization problems whose feasible set is described by using the graph of the solution set mapping of a parametric optimization problem. Chapter 2 describes a constraint qualification to MPECs considered as an application of calmness concept of multifunctions and is used to derive M-stationarity conditions for MPEC. Chapter 3 discusses the first- and second-order optimality conditions derived for a special case of a bilevel optimization problem in which the constraint set of the lower level problem is described as a general compact convex set. Chapter 4 concentrates the results of the modelization and analysis of deregulated electricity markets with a focus on auctions and mechanism design. Chapter 5 focuses on optimization approaches called reflection methods for protein conformation determination within the framework of matrix completion. The last chapter (Chap. 6) deals with the single-valuedness of quasimonotone maps by using the concept of single-directionality with a special focus on the case of the normal operator of lower semi-continuous quasiconvex functions.