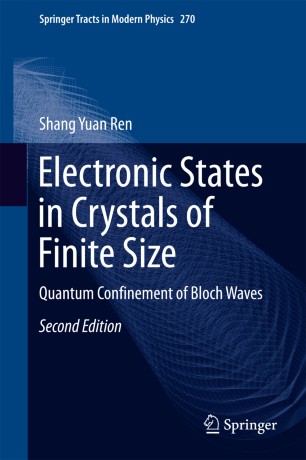 This book presents an analytical theory of the electronic states in ideal low dimensional systems and finite crystals based on a differential equation theory approach. It provides precise and fundamental understandings on the electronic states in ideal low-dimensional systems and finite crystals, and offers new insights into some of the basic problems in low-dimensional systems, such as the surface states and quantum confinement effects, etc., some of which are quite different from what is traditionally believed in the solid state physics community. Many previous predictions have been confirmed in subsequent investigations by other authors on various relevant problems. In this new edition, the theory is further extended to one-dimensional photonic crystals and phononic crystals, and a general theoretical formalism for investigating the existence and properties of surface states/modes in semi-infinite one-dimensional crystals is developed. In addition, there are various revisions and improvements, including using the Kronig-Penney model to illustrate the analytical theory and make it easier to understand. This book is a valuable resource for solid-state physicists and material scientists.

Shang Yuan REN pursued his graduate study with Professor Kun HUANG at Peking University(PKU), worked on theoretical semiconductor physics after  he  graduated  from  PKU  in  1963.   He  worked  with  Professor  Walter A. Harrison at Stanford University on theoretical solid state physics from 1978-1980, as one of earliest visiting scholars from P. R. China to the United States.  Then he worked as a research associate at University of  Missouri at Kansas City, University of Illinois at Urbana-Champaign.  He was back to the University of Science and Technology of China(USTC) in 1981 and worked as an associate professor and then a professor of physics at USTC. He worked as a visiting professor at University of Notre Dame, and a research professor at Arizona State University.  He joined PKU as a professor of physics since 1994.  He is now an emeritus professor at PKU. He  has  published  about  100  research  articles.   His  research  interests  include Low-Dimensional Physics, Theoretical Solid State Physics, Physics of Semiconductors/Semiconductor Devices, M¨obius Inversions and Their Applications  in  Science  and  Engineering,  Electronic  Structure  of  Biological Macromolecules.