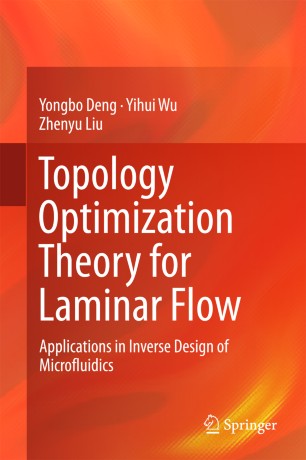 Applications in Inverse Design of Microfluidics

This book presents the topology optimization theory for laminar flows with low and moderate Reynolds numbers, based on the density method and level-set method, respectively. The density-method-based theory offers efficient convergence, while the level-set-method-based theory can provide anaccurate mathematical expression of the structural boundary.

Unsteady, body-force-driven and two-phase properties are basic characteristics of the laminar flows. The book discusses these properties, which are typical of microfluidics and one of the research hotspots in the area of Micro-Electro-Mechanical Systems (MEMS), providing an efficient inverse design approach for microfluidic structures. To demonstrate the applications of this topology optimization theory in the context ofmicrofluidics, it also investigates inverse design for the micromixer, microvalve and micropump, which are key elements in lab-on-chip devices.

Yongbo Deng received the Ph.D. degree in mechanical engineering from University of Chinese Academy of Sciences, in June of 2012. From July of 2012, he began his Assistant Professor position, in State Key Laboratory of Applied Optics (SKLAO), Changchun Institute of Optics, Fine Mechanics and Physics (CIOMP), Chinese Academy of Sciences. In September of 2014, he derived his Associate Professor position in the same laboratory. During this period, he ever worked in IMTEK, University of Freiburg, for his research collaboration on electromagnetic metamaterial. In May of 2016, he derived the Guest Professor Fellowship from Karlsruhe Institute of Technology (KIT) for his outstanding research on topology optimization-based inverse design methodology. His research interests are topology optimization-based inverse design method with applications in the areas of microfluidics and photonics, and the fabrication processes of MEMS devices.

tion in hydrodynamics and mechanics

Yihui Wu received her PhD degree from Changchun Institute of Optics, Fine Mechanics and Physics (CIOMP), Chinese Academy of Sciences (CAS) in 1996. She has been a professor of CIOMP since 1999 and now she is a distinguished professor of CAS. She is the group leader of Micro/Nano research in CIOMP. Her research interests are high speed flywheel, spectrometer, Lab-on-a-chip and label-free photonic/phononic biosensors and super resolution imaging.