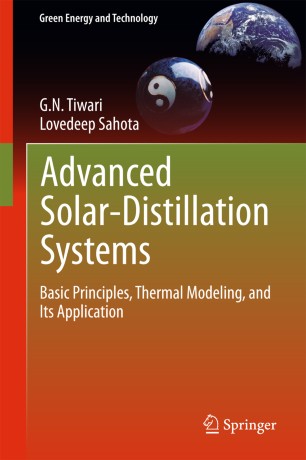 This book is primarily intended to serve as a textbook and reference work for graduate and professional training coursework on solar desalination of water. The book begins with an introduction to the increasing demand for potable water, various types of water pollution and its impacts on human health, and goes on to cover basics of desalination technologies. It covers all aspects of solar-energy based distillation and desalination for producing potable water resources, including radiation and heat transfer concepts, a history of solar distillation systems, and background on solar collectors. The contents include thermal modeling and parametric study of solar distillation. Energy and exergy aspects are analyzed in detail, including energy matrices of solar distillation. A special chapter on exeroeconomics introduces fundamental equations which include the general balance equation, thermodynamic balance equations, and economic balance equations. A chapter on Economic Analysis of Solar Distillation completes the coverage. The book includes solved examples and end-of-chapter exercises in the form of both problems and objective-type questions. The contents of this book are useful to students, researchers, professionals, and policymakers looking for a comprehensive resource on solar desalination.