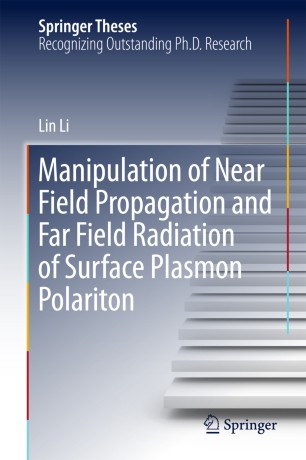 This book mainly focuses on the study of steering electromagnetic fields in near-field and far-field contexts involving plasmonic structures. It also offers a new approach to achieving full control of optical polarizations and potentially boosting the development in photonic information processing. A new in-plane phase modulation method is proposed and described, by means of which a series of optical beams were realized with nanostructures in metal surfaces, such as a plasmonic Airy beam, broad band focusing beam, and demultiplexing, collimated beam, as well as an optical orbital angular momentum (OAM) beam. Further, the book presents a plasmonic polarization generator, which can reconfigure an input polarization to all kinds of states simultaneously.

Lin Li completed his B. Sc. in physics at Wuhan University, China in 2005, and received his Ph.D. in physics from the School of Physics of Nanjing University in June 2014. His major research project in Prof. Shining Zhu’s group was on the physics and potential applications of plasmonics. Subsequently, he became a post-doc fellow working with Prof. Xiang Zhang at the Department of Mechanical Engineering, University of California, Berkeley, focusing on optical meta surface and super-resolution imaging.