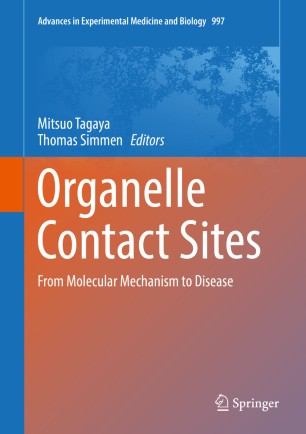 From Molecular Mechanism to Disease

Part of the Advances in Experimental Medicine and Biology book series (AEMB, volume 997)

This book provides the first comprehensive coverage of the quickly evolving research field of membrane contact sites (MCS). A total of 16 chapters explain their organization and role and unveil the significance of MCS for various diseases. MCS, the intracellular structures where organellar membranes come in close contact with one another, mediate the exchange of proteins, lipids, and ions. Via these functions, MCS are critical for the survival and the growth of the cell. Owing to that central role in the functioning of cells, MCS dysfunctions lead to important defects of human physiology, influence viral and bacterial infection, and cause disease such as inflammation, type II diabetes, neurodegenerative disorders, and cancer. To approach such a multifaceted topic, this volume assembles a series of chapters dealing with the full array of research about MCS and their respective roles for diseases. Most chapters also introduce the history and the state of the art of MCS research, which will initiate discussion points for the respective types of MCS for years to come.

This work will appeal to all cell biologists as well as researchers on diseases that are impacted by MCS dysfunction. Additionally, it will stimulate graduate students and postdocs who will energize, drive, and develop the research field in the near future.

Mitsuo Tagaya received his Ph.D. at Osaka University in 1985 by revealing the catalytic mechanisms of glycogen phosphorylase and glycogen synthase. He developed new affinity labeling reagents comprising pyridoxal phosphate for the identification of nucleotide-binding sites. He then worked with James E. Rothman, a Nobel Prize laureate in Physiology or Medicine 2013, at Princeton, where he began organelle research. After returning to Japan, he became associate professor in a newly established department, the School of Life Sciences, at Tokyo University of Pharmacy and Life Sciences in 1994, and became professor in 1997. His interest has focused on the mechanism of the organization of the microdomains of the endoplasmic reticulum.

Thomas Simmen studied biochemistry at the University of Basel. Following a Ph.D. in Lausanne, where he unraveled the functions of the AP-4 adaptor complex in basolateral sorting, he did two postdoctoral fellowships, one with Roberto Sitia in Milan, the other with Gary Thomas in Portland OR. This period introduced him to the connections between the endoplasmic reticulum (ER) and mitochondria, because he worked on Ero1α, a regulator of ER-mitochondria calcium signaling, and on PACS-2, the first identified factor required for the tethering of the ER to mitochondria. Starting in 2005, Thomas Simmen became a faculty member of the Department of Cell Biology at the University of Alberta (Edmonton, Canada). The Simmen laboratory detected ER protein-folding enzymes such as calnexin and TMX1 and the small GTPase Rab32 as factors controlling the function of ER-mitochondria contacts and the mitochondria-associated membrane (MAM).