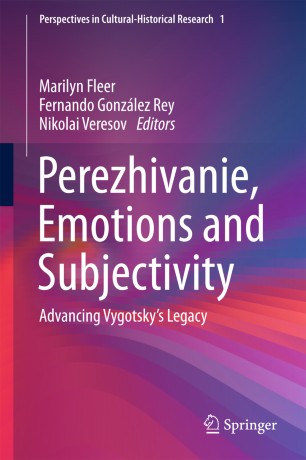 This book draws upon Vygotsky’s idea of perezhivanie, emotions and imagination, and introduces the concepts of subjective sense and subjective configuration. These concepts are crucial for explaining and understanding children’s development from a cultural-historical perspective. A book which theorises the relations between the social and the individual through a study of a child’s perezhivanie, which analyses emotions more holistically, and advances the concepts of subjective sense and subjective configuration, is much needed. This book examines the complexity of human development through a comprehensive elaboration of these concepts, allowing for new insights to be put forward. It doesn’t always follow the chronological order of Vygotsky’s publications, as many of his works remained in the family archives until the 1980s, when his Selected Works were first published in Russian. There has long been a need for a contemporary book on the scholarly treatment of perezhevanie, emotions, and subjectivity, and as such this book revisits dominant representations of these concepts and then puts forward new ways of conceptualising and using them in empirical research. The chapters cover a broad range of case studies where the concepts of perezhivanie, emotions and imagination and subjective sense and subjective configuration are used to give new empirical and theoretical insights into the study of human development.

Professor Marilyn Fleer holds the Foundation Chair of Early Childhood Education at Monash University, Australia, and is the immediate past president of the International Society for Cultural Activity Research (ISCAR). Her research interests focus on early years learning and development, with a special focus on pedagogy, play, culture, science, and design and technology.
Professor Fernando Luís González Rey is a professor at the Faculty of Education and Health Sciences of the University Centre of Brasília, Brazil, and senior associate professor at the Faculty of Education of the University of Brasília. He obtained his PhD degree at the Institute of General and Pedagogical Psychology in Moscow in 1979, and his Doctor in Science degree at the Institute of Psychology of the Academy of Science in Moscow in 1987. He is coordinator of the research group “Subjectivity in health and in education” at the University of Brasília. His main research interest is related to the advancement of theory on subjectivity from a cultural-historical standpoint based on researching in education, health and social subjective realities.
Dr. Nikolay Veresov is an associate professor at the Faculty of Education at Monash University, Australia. He worked as a day-care centre and kindergarten teacher (1987-1991) and secondary school teacher (1982-1987). He obtained his first PhD degree in Moscow in 1990 and started his academic career in Murmansk (Russia) as a senior lecturer (1991-1993) and the head of the Department of Early Childhood (1993-1997). His second PhD was obtained at the University of Oulu (Finland) in 1998. From 1999 to 2011 he was affiliated to the Kajaani Teacher Training Department (Finland) as a senior researcher and the scientific director of the international projects. His areas of interest include development in early years, cultural-historical theory and research methodology.