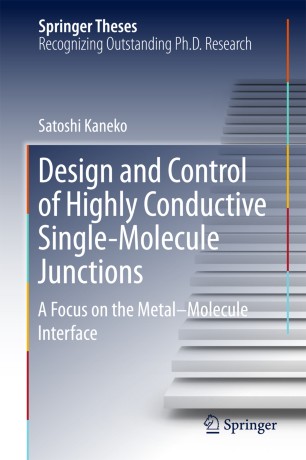 A Focus on the Metal–Molecule Interface

This thesis describes improvements to and control of the electrical conductance in single-molecule junctions (SMJs), which have potential applications in molecular electronics, with a focus on the bonding between the metal and molecule. In order to improve the electrical conductance, the π orbital of the molecule is directly bonded to the metal orbital, because anchoring groups, which were typically used in other studies to bind molecule with metal electrodes, became resistive spacers. Using this direct π-binding, the author has successfully demonstrated highly conductive SMJs involving benzene, endohedral metallofullerene Ce@C82, and nitrogen. Subsequently, the author investigated control of the electrical conductance of SMJs using pyrazine. The nitrogen atom in the π-conjugated system of pyrazine was expected to function as an anchoring point, and two bonding states were expected. One originates primarily from the π orbital, while the other originates primarily from an n state of the nitrogen. Measurements of conductance and dI/dV spectra coupled with theoretical calculations revealed that the pyrazine SMJ has bistable conductance states, in which the pyrazine axis is either tilted or parallel with respect to the junction axis. The bistable states were switched by changing the gap size between the metal electrodes using an external force. Notably, it is difficult to change the electrical properties of bulk-state materials using mechanical force. The findings reveal that the electron transport properties of a SMJ can be controlled by designing a proper metal–molecule interface, which has considerable potential for molecular electronics. Moreover, this thesis will serve as a guideline for every step of SMJ research: design, fabrication, evaluation, and control.