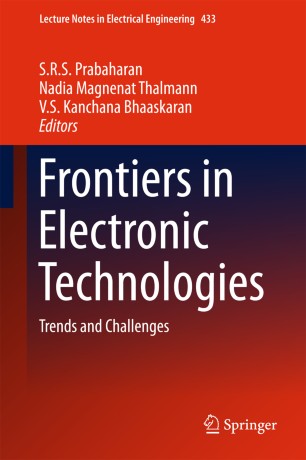 This book is a collection of keynote lectures from international experts presented at International Conference on NextGen Electronic Technologies (ICNETS2-2016). ICNETS2 encompasses six symposia covering all aspects of electronics and communications domains, including relevant nano/micro materials and devices . This volume comprises of recent research in areas like computational signal processing analysis, intelligent embedded systems, nanoelectronic materials and devices, optical and microwave technologies, VLSI design: circuits systems and application, and wireless communication networks, and the internet of things. The contents of this book will be useful to researchers, professionals, and students working in the core areas of electronics and their applications, especially to signal processing, embedded systems, and networking.

Dr. S.R.S. Prabaharan is Professor and Dean of School of Electronics Engineering (SENSE), VIT University, Chennai campus since August 2015. In the past he has worked with  Manipal International University in Malaysia  the University of Nottingham Malaysia/UK campuses, and CSIR National Laboratories (NAL and CECRI).  He is the recipient of young scientist award in the year 1994. He spent a significant time in France and US labs and Universities as Post Doctoral Fellow and technology consultant. He has served as a faculty member in various international universities including University of Malaya, Universiti Teknologi Petronas and Multimedia University, UPMC, Paris, UPJV, Amiens, France and Tohoku University, Japan. He has also served as an adjunct professor in Malaysia University of Science and Technology and Manipal International University, Malaysia. His has served on various expert committees in Malaysia (Multimedia Development Corporation and office of Prime Minister Department (UNIK) and FP7 European Union committee). He was the technology consultant to United States Army research project under the Southern University, Baton Rouge, USA.  He was the recipient of prestigious Erasmus Mundus visiting scholar under the European union (EU) and held a visiting professorship in France. He is also the recipient of UK-Singapore visiting scientist award in 2007 in the University of Sheffield, UK. Recently, he has held a visiting professorship in Tohoku University, Japan.  Dr Prabaharan has received several research grants from DST, DRDO, Young Scientist grant scheme, Malaysian government grant (MOSTI and MOHE) and Motorola Inc., USA. His expertise focuses on supercapacitors for a variety of application including naval missiles (DRDO). His current research interests include Memristors and Neuristors as well. He has delivered over 52 invited/keynote talks in international scientific conferences/symposia.  He has edited a few research books and has been the guest editor for international journals as well.  He served as consultant to the battery and supercapacitor industries. He has published over 75 high impact journal papers and over 200 conference papers, and holds international granted patents (Malaysia, USA and Japan). He is known for his notable research in the areas of power sources (Li-Ion batteries and supercapacitors), RF Energy harvesting, advanced power solutions for IOT gadgets and memristors.

Nadia Magnenat Thalmann is currently Professor and Director of the Institute for Media Innovation, Nanyang Technological University, Singapore. She is also the Founder and Director of the MIRALab, an interdisciplinary lab in Human Computer Animation, University of Geneva, Switzerland. Her global research area is the modelling and simulation of Virtual Humans. She is also working on Social Robots, mixed realities and medical simulation. All over her career, she has received many artistic and scientific Awards, among them the 2012 Humboldt Research Award, and two Doctor honoris Causa (from University of Hanover in Germany and from the University of Ottawa in Canada). She is Editor-in-Chief of the Journal The Visual Computer (Springer-Verlag) and is a Member of the Swiss Academy of Engineering Sciences.

Dr V S Kanchana Bhaaskaran is a professor in the School of Electronics Engineering and Dean of Academics at VIT University Chennai. She holds an undergraduate degree in Electronics and Communication Engineering from Institution of Engineers (India), Calcutta, an M.S.  in Systems and Information from Birla Institute of Technology and Sciences, Pilani, and a Ph D from V I T University. She has more than 37 years of industry, research and teaching experience by serving the Department of Employment and Training, Government of Tamil Nadu, IIT Madras, Salem Cooperative Sugar Mills’ Polytechnic College, SSN College of Engineering and VIT University Chennai. Her specializations include low power VLSI circuit design, Microprocessor architectures and Linear Integrated Circuits. She has published around 80 papers in international journals and conferences, and has one patent  granted and one filed. She has authored 2 books on Linear Integrated Circuits.   She is the Fellow of the Institution of Engineers (India), Fellow of the Institution of Electronics and Telecommunication Engineers, Life Member of the Indian Society for Technical Education,  and Member of IEEE.