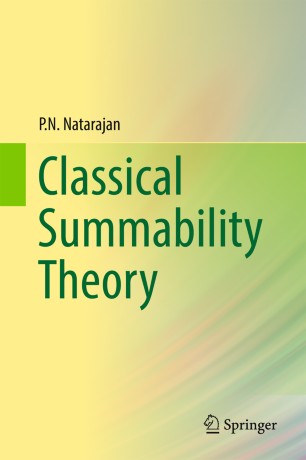 This book presents results about certain summability methods, such as the Abel method, the Norlund method, the Weighted mean method, the Euler method and the Natarajan method, which have not appeared in many standard books. It proves a few results on the Cauchy multiplication of certain summable series and some product theorems. It also proves a number of Steinhaus type theorems. In addition, it introduces a new definition of convergence of a double sequence and double series and proves the Silverman-Toeplitz theorem for four-dimensional infinite matrices, as well as Schur's and Steinhaus theorems for four-dimensional infinite matrices. The Norlund method, the Weighted mean method and the Natarajan method for double sequences are also discussed in the context of the new definition. Divided into six chapters, the book supplements the material already discussed in G.H.Hardy's Divergent Series. It appeals to young researchers and experienced mathematicians who wish to explore new areas in Summability Theory..