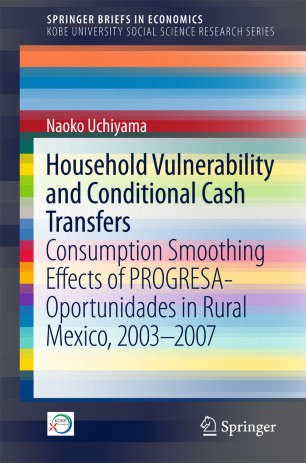 This book empirically analyzes the vulnerability of poor households in rural areas of Mexico and the effects of the conditional cash transfer (CCT) program called PROGRESA-Oportunidades by adopting the two most recent sets of rural household panel data for 2003−2007. The period covered by this book coincides with the unexpected reversal of the poverty trend observed in 2006  to the present which raised a question of vulnerability to poverty of Mexican households that had emerged from poverty in the early 2000s under a stable economic condition. The author applies different methodologies in defining vulnerable households in each chapter, enabling discussion of the multiple dimensions of vulnerability from varying perspectives, to identify the determinants of rural household vulnerability to poverty and the CCT effects. Empirical studies reported in this book confirmed a certain role played by PROGRESA-Oportunidades in mitigating vulnerability; however, the effect was rather partial and could not fully achieve poverty reduction during the surveyed period. By combining the existent discussions and empirical results of the CCT impacts, the author concludes that a possible limitation of PROGRESA-Oportunidades may be the excessive focus on the labor supply side, thus complementary policies must enhance the demand side, especially in creating decent employment opportunities for youth.