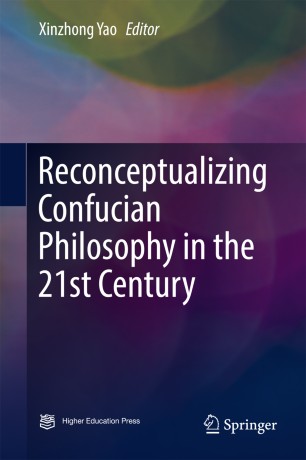 This book comprises 30 chapters representing certain new trends in reconcenptualizing Confucian ideas, ideals, values and ways of thinking by scholars from China and abroad. While divergent in approaches, these chapters are converged on conceptualizing and reconceptualizing Confucianism into something philosophically meaningful and valuable to the people of the 21st century. They are grouped into three parts, and each is dedicated to one of the three major themes this book attempts to address. Part one is mainly on scholarly reviews of Confucian doctrines by which new interpretations will be drawn out. Part two is an assembled attempt to reexamine Confucian concepts, in which critiques of traditional views lead to new perspectives for perennial questions. Part three is focused on reinterpreting Confucian virtues and values, in the hope that a new sense of being moral can be gained through old normative forms.

Professor Yao Xinzhong is the Dean of School of Philosophy, Renmin University of China and the founding director of Lau China Institute of King’s College London. Prior to these appointments, Professor Yao was Professor of Religion and Ethics at the University of Wales, Lampeter, and a senior research fellow at the Ian Ramsey Centre, University of Oxford.
Professor Yao has written a number of influential books and articles on the subject of Confucianism, including comparative studies with Christianity. He is the author and editor of the Encyclopaedia of Confucianism. In 1998, in recognition of his work promoting Confucianism in the UK, he was made honorary President of the Confucian Academy in Hong Kong.