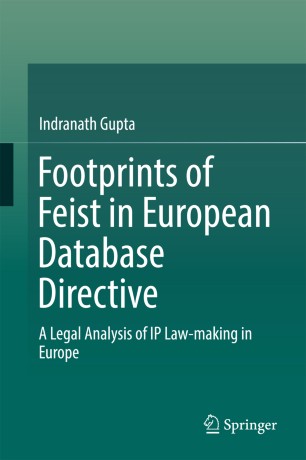 A Legal Analysis of IP Law-making in Europe

Connected to the jurisprudence surrounding the copyrightability of a factual compilation, this book locates the footprints of the standard envisaged in a US Supreme court decision (Feist) in Europe. In particular, it observes the extent of similarity of such jurisprudence to the standard adopted and deliberated in the European Union. Many a times the reasons behind law making goes unnoticed. The compelling situations and the history existing prior to an enactment helps in understanding the balance that exists in a particular legislation. While looking at the process of enacting the Database Directive (96/9/EC), this book reflects upon the concern that was expressed with the outcome of Feist decision in Europe.

Dr. Gupta has been involved in qualitative and quantitative research. He was appointed as the research collaborator by the Università Bocconi, Milan, Italy, for a project funded by the European Commission under the 7th framework programme. He has also been appointed as a research assistant for a project relating to data protection compliance level at Brunel University, London. Dr. Gupta has also worked as an advocate in a solicitors’ firm at the Calcutta High Court. He has published in European and Indian Law journals and has spoken at international conferences and seminars. His research areas include database right, copyright, data protection, cyber law and interface of IP and Competition Law.