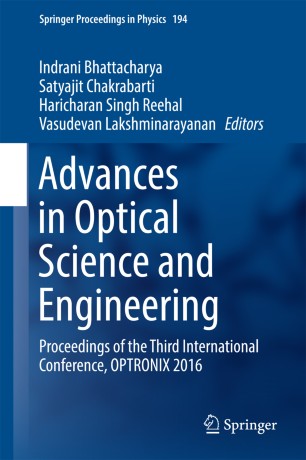 Advances in Optical Science and Engineering

The Proceedings of 3rd International Conference on Opto-Electronics and Applied Optics, OPTRONIX 2016 is an effort to promote and present the research works by scientists and researchers including students in India and abroad in the area of Green Photonics and other related areas as well as to raise awareness about the recent trends of research and development in the area of the related fields. The book has been organized in such a way that it will be easier for the readers to go through and find out the topic of their interests.

Indrani Bhattacharya is Associate Professor and Head, Research and Development Cell, University of Engineering & Management, Kolkata, India, the newly formed University by well- known Institute of Engineering & Management Group (www.iem.edu.in). Ms. Bhattacharya has secured her M.Sc. (Tech) degree from the Department of Applied Physics, University of Calcutta in Applied Physics with specialization in Opto-electronics in 1988. Ms. Bhattacharya is pursuing her Ph.D. (Tech) from Department of Applied Optics and Photonics, University of Calcutta under the guidance of Emeritus Professor Prof. Lakshminarayan Hazra. Ms. Bhattacharya has a long professional experience (~20 years) working as a Research Scientist and Engineer in a leading Telecom Industry in India. She has experience in study, development and characterization of Fused Fibre Optics Biconical Taper Couplers, Optical Fibre Joint Boxes, Slotted core and loose tube fibre optic cables. Ms. Bhattacharya is trained in UNIX, SYBASE, ORACLE with Developer 2000. Ms. Bhattacharya is the Faculty Adviser of SPIE and OSA approved IEM-UEMK Group Student Chapters and she has been enlisted as Women in Optics in the year planner 2016-17 published by SPIE. Prof. Bhattacharya is the Co-coordinator of the Department of Science and Technology (DST), Govt. of India sponsored INSPIRE (INnovation in Science Pursuit for Inspired Research) Science Internship Program, “The Enchanting World of Science” in IEM / UEMK. Ms. Bhattacharya has published ten research works in scientific journals including Conference publications starting from 2011. Her interest of research area includes PSF Engineering, Optical Macro- and Micro-Trapping, Bio-Medical Applications, Light-Matter Interactions, Quantum Computing, Optical Fibre Technology, Nano-Photonics, Solar Concentrator Optics, and so on. Ms. Bhattacharya is the member of Optical Society of India, Optical Society of America, Society of Photonics and Instrumentation Engineering (SPIE) and has been selected as Steering Committee member of International Society of Opto-mechatrinics (ISOM) in Tokyo, Japan. Ms. Bhattacharya is the Convener and TPC chair of International Conference on Opto-Electronics and Applied Optics, OPTRONIX 2014, 2015 and 2016.Prof. Dr. Satyajit Chakrabarti, Pro-Vice Chancellor, University of Engineering & Management, Kolkata and Jaipur Campus, India and Director of Institute of Engineering & Management, IEM, a premier organization in education sector in India, started many entrepreneurial ventures starting from Aug, 2002 to till date. As the Director of one of the most reputed organization in Engineering & Management in Eastern India of  Budget - $10 Million with  Reporting Team Size  250, he started PGDM Programme to run AICTE approved Management courses, Toppers Academy to train students for certificate courses, Software Development in the field of ERP solutions. Dr. Chakrabarti was Project Manager in TELUS, Vancouver, Canada from Feb, 2006 to Sept, 2009 where he was involved with extensive experience in planning, execution, monitoring, communicating with stakeholders, negotiating with vendors and cross-functional teams, motivating members. He managed Projects a combined budget of $3 million along with 50 people in his team.

Prof. Dr. Chakrabarti has got his B.Tech in Computer Science & Engineering in May 2002 from University of Kalyani, West Bengal, India and got his MS in Computer Science from University of British Columbia (UBC), Vancouver, Canada in Sept 2004. He won scholarships and graduated in the top 1% of the class and led a team of 4 Computer Engineers to successfully complete the Research Project: “Advanced OS (AVOS): A Real-Time 32 bit Operating System”. He is the Convener and General Chair of 7th International Conference on IEMCON which is going to be held in Canada and New York, USA from 15-17 October, 2016 and 20-22 October, 2016.

Vasudevan Lakshminarayanan (aka Vengu) received his Ph.D. from the University of California at Berkeley and is currently a professor of Vision Science, Physics, Electrical and Computer Engineering and Systems Design Engineering at the University of Waterloo. He has held visiting and faculty appointments at the universities of California at Berkeley, at Irvine, University of Missouri, the University of Michigan, Glasgow Caledonian University, Ryerson University and the Indian Institute of Technology, Delhi.  He has been selected as a GIAN Professor of Physics at the Indian Institute of Technology, Madras (2016), and has been named as the International Visiting Professor of Biophotonics at the University of Brescia, Italy in 2017. He has had numerous honors, including Fellow of AAAS, APS,  IoP, OSA, SPIE, etc., as well as  Senior Member status of IEEE  and the recipient  of various awards, including most recently, the Esther Hoffman Beller medal of OSA (2013), and the Optics Educator award of SPIE (2011).  He has been a KITP Scholar at the Kavli Institute of Theoretical Physics at the University of California at Santa Barbara.  He is currently the Chair of Education of SPIE – The International Society for Optics and Photonics and is deeply involved with education and outreach in developing nations. He is a consultant to the ophthalmic and medical devices section of the FDA (from 2013) and is technical editor or section editor of a number of journals including Journal of Modern Optics and Optics Letters. He has authored or edited about 13 books, and over 300 publications in topics ranging from  optical physics and engineering, neuroscience, bioengineering, applied math, cognitive science and ophthalmology/optometry and serves on grant review panels for a number of funding agencies both in the US and abroad.Prof. Haricharan S. Reehal is head of the Advanced Materials group in the School of Engineering at London South Bank University (LSBU). His research is focused on PV materials and devices, particularly thin film silicon, low temperature processing and novel concepts for PV devices including nanowires and plasmonics. His interests include improving PV module performance and PV systems. He has wide expertise in thin film growth and in the characterization of materials and devices. Prior to joining LSBU, Prof. Reehal was a lecturer in Physics at Bradford University working on electroluminescent display devices and then Team Leader of the Solid State and Surface Science Groups at BP Research UK. His work at BP ranged from photovoltaics (PV) and novel devices to advanced materials, coatings and surface science. In PV, his team made significant contributions to the development of BP's laser buried grid solar cell technology as well as thin film crystalline Si and GaAs technologies. Prof. Reehals’ work has been supported by EPSRC, Industry and charities and he has been a partner in several research consortia and international collaborations. He has supervised more than 30 PhD students and research fellows and acted as the external PhD examiner in more than 20 national and international vivas. He has organised several successful UK conferences and meetings on PV and is a member of various national and international PV conference committees. He is a member of EPSRC’s peer review college and acted as a reviewer for many bodies. He contributed to the UK Energy Research Centre (UKERC) task force on developing a roadmap for PV research. He is a chartered engineer (CEng) and a Fellow of the Institute of Physics. He is on the editorial board of the Journal of Solar Energy and has published more than 100 papers, 4 patents as well as contributed to more than 100 confidential BP technical reports. Prof. Reehal has carried out several senior academic management roles at LSBU including Director of Research in the Faculty of Engineering, Science and the Built Environment.