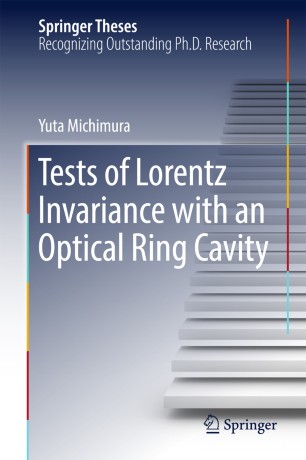 Tests of Lorentz Invariance with an Optical Ring Cavity

It introduces the following three keys which play an important role in achieving high-precision measurement: (1) a high-index element (silicon) interpolated into part of the light paths in the optical ring cavity, which improves sensitivity to the violation of the Lorentz symmetry, (2) double-pass configuration of the interferometer, which suppresses environmental noises, and (3) continuous data acquisition by rotating the optical ring cavity, which makes it possible to search for higher-order violations of Lorentz symmetry. In addition to those well-described keys, a comprehensive summary from theoretical formulations to experimental design details, data acquisition, and data analysis helps the reader follow up the experiments precisely.

Yuta Michimura, an assistant professor at the Department of Physics, The University of Tokyo, is an experimentalist in the theory of relativity and gravity. He is working on the development of the gravitational wave telescope KAGRA and experimental verification of fundamental physics.