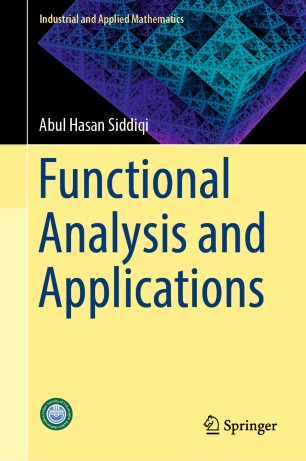 Part of the Industrial and Applied Mathematics book series (INAMA)

The book is primarily intended as a textbook for graduate and advanced undergraduate students in applied mathematics and engineering. It offers several attractive features making it ideally suited for courses on functional analysis intended to provide a basic introduction to the subject and the impact of functional analysis on applied and computational mathematics, nonlinear functional analysis and optimization. It introduces emerging topics like wavelets, Gabor system, inverse problems and application to signal and image processing.

ABUL HASAN SIDDIQI is a distinguished scientist and professor emeritus at the School of Basic Sciences and Research at Sharda University, Greater Noida, India. Professor Siddiqi has held several important administrative positions such as Chairman, Department of Mathematics, Dean Faculty of Science, Pro-Vice-Chancellor in one of the Central Universities of India—Aligarh Muslim University. He has been actively associated with International Centre for Theoretical Physics, Trieste, Italy (UNESCO organisation) in different capacities for more than 20 years, was professor of Mathematics at King FahadFahd University of Petroleum and Minerals, Saudi Arabia for 10 years, consultant to Sultan Qaboos University, Oman for 5 terms, Istanbul Aydin University, Turkey for three years and Institute of Micro-electronics, Malaysia for five months. Having been awarded three German Academic Exchange Fellowships to carry out mathematical research in Germany, he has also jointly published more than 100 research papers with his research collaborators, 5 books and edited proceedings of 9 international conferences. He is the founder secretary of the Indian Society of Industrial and Applied Mathematics (ISIAM), which celebrated its Silver Jubilee in January 2016. He is editor-in-chief of the Indian Journal of Industrial and Applied Mathematics, published by the ISIAM, and of the book series Industrial and Applied Mathematics with Springer. Recently he has been elected President of ISIAM which represents India at the Apex forum of Industrial and Applied Mathematics-ICIAM.