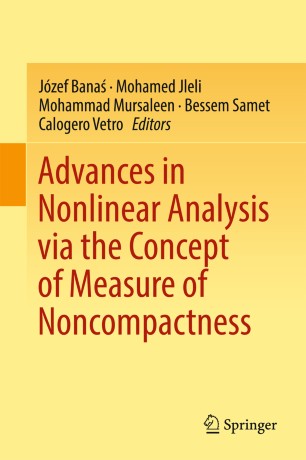 Advances in Nonlinear Analysis via the Concept of Measure of Noncompactness

This book offers a comprehensive treatment of the theory of measures of noncompactness. It discusses various applications of the theory of measures of noncompactness, in particular, by addressing the results and methods of fixed-point theory. The concept of a measure of noncompactness is very useful for the mathematical community working in nonlinear analysis. Both these theories are especially useful in investigations connected with differential equations, integral equations, functional integral equations and optimization theory. Thus, one of the book’s central goals is to collect and present sufficient conditions for the solvability of such equations. The results are established in miscellaneous function spaces, and particular attention is paid to fractional calculus.

JÓZEF BANAŚ is Full Professor of mathematics and chair of the Department of Nonlinear Analysis in Rzeszów University of Technology, Poland. Professor J. Banaś visited several scientific centers over the world. He was a participant and speaker of numerous international conferences and congresses. He is member of the editorial committees of many journals of international repute. Professor J. Banaś was a lead guest editor and guest editor of many special issues for Abstract and Applied Analysis, Journal of Function Spaces, Scientific World Journal and Advances in Pure Mathematics. He has over 150 published research papers in international journals. Professor J. Banaś is also coauthor of three books: Measures of Noncompactness in Banach Spaces, Lecture Notes in Pure and Applied Mathematics 60 (Marcel Dekker, New York, 1980) (with K. Goebel); Bounded Variation and Around (De Gruyter Series in Nonlinear Analysis and Applications 17, Walter De Gruyter, Berlin, 2014) (with J. Appell and N. Merentes); Sequence Spaces and Measure of Noncompactness with Applications to Differential and Integral Equations (Springer, New Delhi, 2014) (with M. Mursaleen). Professor J. Banas is a supervisor of 10 Ph.D. theses and over 150 B.Sc. and M.Sc. theses in mathematics.

MOHAMED JLELI is Full Professor of Mathematics at King Saud University, Saudi Arabia. He obtained his PhD degree in Pure Mathematics entitled “constant mean curvature hypersurfaces” from Faculty of Sciences of Paris 12, France, in 2004. He has written several papers on differential geometry, partial differential equations, evolution equations, fractional differential equations and fixed point theory. He is on the editorial board of some international journals and acts as a referee for several international journals in mathematics.

M. MURSALEEN is a Full Professor & Chairman of Department of Mathematics, Aligarh Muslim University, India. As an active researcher, Prof. Mursaleen has authored seven books and five book chapters, in addition to his contributions to more than 200 research papers in ISI journals. He is referee of more than 100 scientific journals and member of the editorial board of various scientific journals, international scientific bodies and organizing committees. He has guided 15 PhD students so far. He has visited several countries including USA & UK and delivered about 38 talks. His main research interests are Summability, Approximation Theory and Operator Theory. He has been recipient of the Outstanding Researcher of the Year-2014 Award of Aligarh Muslim University.

BESSEM SAMET is Full Professor of Applied Mathematics at King Saud University, Saudi Arabia. He obtained his PhD degree in Applied Mathematics entitled “topological derivative method for Maxwell equations and its applications” from Paul Sabatier University, France, in 2004. His topics of interest are different branches of nonlinear analysis, including fixed-point theory, partial differential equations, differential equations, fractional calculus, etc. He is the author or coauthor of more than 100 published papers in ISI journals. He is in the list of Thomson Reuters Highly Cited Researchers for the years 2015 and 2016.

CALOGERO VETRO is Assistant Professor of Mathematical Analysis at University of Palermo, Italy, where he has been teaching since 2005. He received the Laurea Degree in Mechanical Engineering in 2000 and the Ph.D. degree in Engineering of Automation and Control Systems in 2004. His research interests are in best approximation, fixed point theory, functional analysis, mathematical programming, operator theory and partial differential equations. He is the author or coauthor of more than 120 published papers. He is in the Thomson Reuters Highly Cited Researchers List for the years 2015 and 2016.