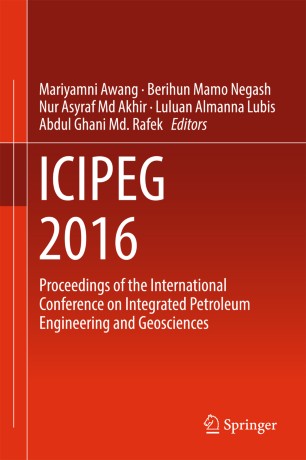 Proceedings of the International Conference on Integrated Petroleum Engineering and Geosciences

This book presents the proceedings of the 4th International Conference on Integrated Petroleum Engineering and Geosciences 2016 (ICIPEG 2016), held under the banner of World Engineering, Science & Technology Congress (ESTCON 2016) at Kuala Lumpur Convention Centre from August 15 to 17, 2016. It presents peer-reviewed research articles on exploration, while also exploring a new area: shale research. In this time of low oil prices, it highlights findings to maintain the exchange of knowledge between researchers, serving as a vital bridge-builder between engineers, geoscientists, academics, and industry.

Berihun Mamo Negash is a Lecturer at the Universiti Teknologi PETRONAS, Department of Petroleum Engineering in Malaysia. He received his B.Sc. degree in Chemical Engineering from Bahir Dar University in Ethiopia and his M.Sc. degree in Petroleum Engineering with a specialization in reservoir engineering from the Norwegian University of Science and Technology. He has taught Chemical Engineering courses at Bahir Dar University for more than 7 years.  At the same time, he was a part-time Lecturer of Petroleum Engineering at the Mekelle University for three consecutive years. Among others, he has taught computational methods, chemical engineering thermodynamics, transport phenomenon, reservoir modeling, and simulation, well logging, formation evaluation, and natural gas engineering. His doctoral thesis dealt with the application of system identification for production optimization of a reservoir. Currently, he is researching the application of machine learning to performance prediction for reservoirs that are producing under various mechanisms.

Nur Asyraf Md Akhir is a Lecturer in Petroleum Engineering at the Universiti Teknologi PETRONAS. She holds a Master of Science degree from the Universiti Teknologi PETRONAS in collaboration with Heriot-Watt University, Edinburgh, UK. She teaches Petroleum Engineering courses such as reservoir rocks and fluid properties, as well as reservoir engineering. Her research interests are in enhanced oil recovery (EOR), mainly in chemical, CO2 and foam flooding, and unconventional reservoirs. Her innovative work on clay minerals and log response has been presented locally and internationally.

Luluan Almanna Lubis is a Lecturer of Geophysics at the Geosciences Department, Universiti Teknologi PETRONAS (UTP). He received his M.Sc. in Petroleum Geosciences (By Research) from the UTP, Malaysia and his B.Sc. in Earth Physics from ITB, Indonesia. He has engaged in extensive fieldwork in Indonesia, acquiring geophysical data in Bandung, Jakarta, East Java, Bali, Sulawesi, and Kalimantan. In 2013, he was appointed as a Lecturer in the Geosciences Department, UTP where he is a full-time researcher at the Centre of Seismic Imaging (CSI), which collaborates with PETRONAS and PETRONAS Research.

Abdul Ghani Md Rafek received his B.Sc. (Hons) in Applied Geology from the University of Malaya, Kuala Lumpur. With a scholarship of the German Academic Exchange Service (DAAD) he continued his postgraduate studies at the Ruhr University, Bochum in Germany, achieving a Dr. rer. nat. (PhD). Upon returning to Malaysia in 1984, he joined the Geology Department of the National University of Malaysia (Universiti Kebangsaan Malaysia) as a lecturer. He worked there until October 2014, becoming an Associate Professor in 1994 and a Professor of Engineering Geology (Geomechanics) in 2007. Having joined the UTP as a Professor in December 2014, his main research interest is in geological discontinuity quantification and characterization for geomechanics. He has extensive experience in rock slope stability, tunnel stability analysis, application of geophysics for rock mass characterization, engineering geology, and hydrogeology.