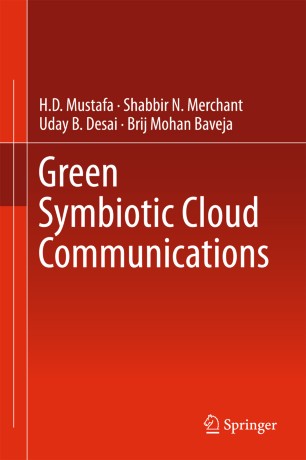 This book intends to change the perception of modern day telecommunications. Communication systems, usually perceived as “dumb pipes”, carrying information / data from one point to another, are evolved into intelligently communicating smart systems.  The book introduces a new field of cloud communications. The concept, theory, and architecture of this new field of cloud communications are discussed. The book lays down nine design postulates that form the basis of the development of a first of its kind cloud communication paradigm entitled Green Symbiotic Cloud Communications or GSCC. The proposed design postulates are formulated in a generic way to form the backbone for development of systems and technologies of the future. The book can be used to develop courses that serve as an essential part of graduate curriculum in computer science and electrical engineering. Such courses can be independent or part of high-level research courses. The book will also be of interest to a wide range of readers including both scientific and non-scientific domains as it discusses innovations from a simplistic explanatory viewpoint.

H.D. Mustafa has graduated Summa Cum Laude (University Gold Medal) in 2001, from TU, New Orleans, USA with a Double Major in Computer Science and Computer Engineering and a PhD in Electrical Engineering. He is the first recipient of the prestigious Chancellor Fellowship in 1998 for pursuing Undergraduate Education. He is awarded the Honoris Causa, Doctor of Engineering Sciences in May 2015. Currently, he is the President R&D of Transocean Inc. and RIG Ltd. He is a fellow of the ACS and ICCA. He has published over 40 journal papers including publications in reputed international journals. He was the Associate Editor of Hydrocarbon Processing Journal from 2007 to 2009. He is a radical and dynamic multidisciplinary scientist and executive, leading interdisciplinary multibillion dollar R&D and Industrial projects. A multidisciplinary researcher his interest is not bound to any specific field but spans all domains of engineering and science. He is a strategic visionary and team leader amalgamating institutional and industrial research and a skilled expert in observing and translating concepts into reality, with operational excellence in diverse environments.

H.D. Mustafa is the Chief Inventor of the Crude Oil Quality Improvement (COQI®) technology and concept, which has market capitalization of US$ 2.5 Billion as of 2014. He was awarded the Merit Recognition Award by NASA, USA in 2005 and the President of India EMPI Award in 2006 by Government of India for his contributions to Research and Development. He was nominated and shortlisted for the prestigious Global Innovator of the Year Award for 2013. In July 2013, H.D. Mustafa achieved a World Record in India for the deepest oil exploration using the COQI® process.

Shabbir N. Merchant received his B. Tech, M. Tech, and PhD degrees all from Department of Electrical Engineering, Indian Institute of Technology Bombay, India. Currently he is a Professor in Department of Electrical Engineering at IIT Bombay. He has more than 30 years of experience in teaching and research. Dr. Merchant has made significant contributions in the field of signal processing and its applications. His noteworthy contributions have been in solving state of the art signal and image processing problems faced by Indian defence. His broad area of research interests are wireless communications, wireless sensor networks, signal processing, multimedia communication, and image processing and has published extensively in these areas. He is a co-author with his students who have won Best Paper Awards. He has been a chief investigator for a number of sponsored and consultancy projects. He has served as a consultant to both private industries and defence organizations. He is a Fellow of IETE. He is a recipient of 10th IETE Prof. S. V. C. Aiya Memorial Award for his contribution in the field of detection and tracking. He is also a recipient of 9th IETE SVC Aiya Memorial Award for ‘Excellence in Telecom Education’. He is a winner of the 2013 VASVIK Award in the category of Electrical & Electronic Sciences & Technology.

Uday B. Desai received the B. Tech. degree from Indian Institute of Technology, Kanpur, India, in 1974, the M.S. degree from the State University of New York, Buffalo, in 1976, and the Ph.D. degree from The Johns Hopkins University, Baltimore, U.S.A., in 1979, all in Electrical Engineering. Since June 2009 he is the Director of IIT Hyderabad. From 1979 to 1987 he was with the Electrical Engineering Dept. at Washington State University, Pullman, WA, U.S.A. From 1987 to May 2009 he was a Professor in the Electrical Engineering Department at the Indian Institute of Technology - Bombay. He has held Visiting Associate Professor's position at Arizona State University, Purdue University, and Stanford University. He was a visiting Professor at EPFL, Lausanne during the summer of 2002. From July 2002 to June 2004 he was the Director of HP-IITM R and D Lab. at IIT-Madras. His research interests are in wireless communication, IoT and statistical signal processing. He is the Editor of the book "Modeling and Applications of Stochastic Processes" (Kluwer Academic Press, Boston, U.S.A. 1986). He is also a co-author of 4 books dealing with signal processing and wireless communication. Dr. Desai is a senior member of IEEE, a Fellow of INSA (Indian National Science Academy), Fellow of Indian National Academy of Engineering (INAE). He is on the board of Tata Communications Limited. He was also on the Visitation Panel for University of Ghana.

Brij Mohan Baveja received a B.Tech from IIT Delhi and two post graduate degrees from England, one in Electrical Engineering from London University and another in Public Management from Birmingham University, UK. He is presently working as Senior Director & Group Coordinator in Department of Electronics and IT (DeitY), Ministry of Communications and IT, Government of India. He has about 35 years of work experience and out of this he has been working in government for last 29 years. At DeitY, his responsibilities include spearheading R&D in ICT sector through favorable policy measures and by research grants. He has been promoting growth of indigenous Convergence, Communications, and Broadband, Networks including technologies for 5G, IoT, Smart Cities and Strategic Electronics. He has been responsible for setting up various ICT Centers of Excellences and autonomous organizations of DeitY throughout the country. Besides Chairing various National Level Conferences, Workshops, Seminars, Panels, he has represented DeitY at various international forums, such as 3GPP standards meeting in USA, Hungary and Czechoslovakia, World Summit on Information Society meetings at Geneva. He has been speaker on sessions in bridging the digital divide at South Korea and Japan. He has chaired sessions on ICT meetings at SAARC countries. He has coordinated international programs of Indo-German, UNDP, Indo-Swiss, Indo-US, Indo-Ireland, Indo-Dutch and Israel. Prior to joining the government in 1986, he has worked in Bharat Electronics Ltd for 3 years at Ghaziabad Unit and prior to this, for 2 years in the UK with a test software company. He has authored over 12 publications as well as 2 book chapters. He is an ISO certified lead assessor and Licensed Amateur Radio (Ham) Operator. He is also fellow member of IETE. He is an IEEE member since 1974.