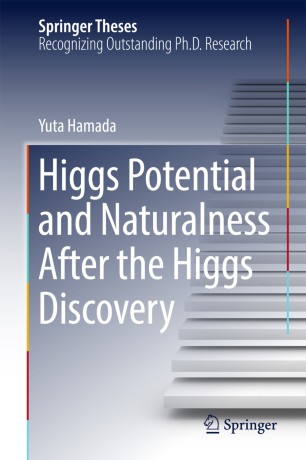 Higgs Potential and Naturalness After the Higgs Discovery

This thesis focuses on the theoretical foundation of the Standard Model valid up to the Planck scale, based on the current experimental facts from the Large Hadron Collider. The thesis consists of two themes: (1) to open up a new window of the Higgs inflation scenario, and (2) to explore a new solution to the naturalness problem in particle physics.

In the first area, on the Higgs inflation scenario, the author successfully improves a large value problem on a coupling constant relevant to the Higgs mass in the Standard Model, in which the coupling value of the order of 105 predicted in a conventional scenario is reduced to the order of 10. This result makes the Higgs inflation more attractive because the small value of coupling is natural in the context of ultraviolet completion such as string theory. In the second area, the author provides a new answer to the naturalness problem, of why the cosmological constant and the Higgs mass are extremely small compared with the Planck scale. Based on the baby universe theory originally proposed by Coleman, the smallness of those quantities is successfully explained without introducing any additional new particles relevant at the TeV energy scale.

Yuta Hamada is a superlative postdoctoral fellow (SPD) of the Japan Society for the Promotion of Science in the High Energy Accelerator Research Organization. He is a theorist in particle physics and works on particle phenomenology, string theory, and cosmology. He is especially interested in the physics of Higgs boson and inflation.