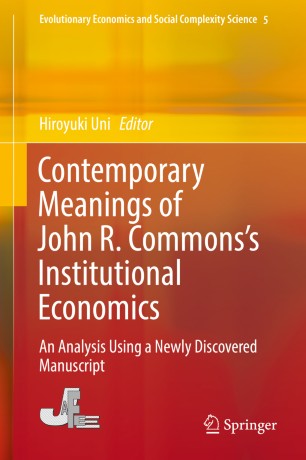 This book is the first to reinterpret John R. Commons's Institutional Economics with a newly discovered manuscript written in 1927 in order to find its contemporary meanings in economic theories. Commons aimed to establish institutional economics to understand capitalism in the USA of that time, when people’s collective actions were gaining importance with the emergence of powerful labor unions, oligopolistic corporations, and national judicial systems. Setting three types of transactions as his central concepts for analysis, Commons described dynamics of capitalism as multiple and cumulative causal processes of transactions, through which the final goal should be achievements of a "reasonable value". He also believed that the reasonable value could be achieved by the evolution of institutions.
There is no doubt that Commons's ideas proposed in Institutional Economics such as transactions and collective actions greatly inspired later economists; however, few studies have contributed to comprehensive understanding of the origin of his masterpiece. To what extent and in what sense had Commons rejected or accepted previous classical economics or marginalism for constituting his original institutional economics? What are the meanings and limitations that reasonable value may have for contemporary political economy?
Institutional Economics as attempts to resolve deep economic problems at that time. Commons's efforts create important implications for us, those who are living in an era after the global financial crisis and confronting various challenges to political economy.