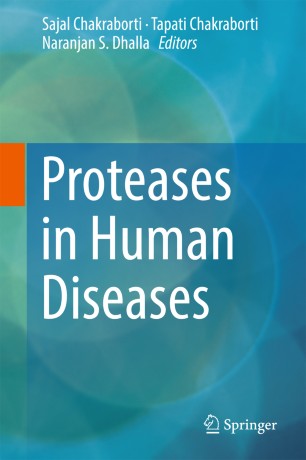 This book bridges the gap between fundamental research and biomedical and pharmacological applications on proteases. It represents a comprehensive overview of the multifaceted field of proteases in cellular environment and highlights the recently elucidated functions of complex proteolytic systems in different diseases. Several established investigators have elucidated the crucial role of proteases in biological processes, including how proteolytic function and regulation can be combined to develop new strategies of therapeutic interventions.
Proteases form one of the largest and most diverse families of enzymes known. It is now clear that proteases are involved in every aspect of life functions of an organism. Under physiological conditions, proteases are regulated by their endogenous inhibitors; however, when the activity of proteases is not regulated appropriately, disease processes can result in. So, there is absolute need for a stringent control of proteolytic activities in cells and tissues.
Dysregulation of proteases may cause derangement of cellular signalling network resulting in different pathophysiological conditions such as vascular remodelling, atherosclerotic plaque progression, ulcer and rheumatoid arthritis, Alzheimer disease, cancer metastasis, tumor progression and inflammation. Additionally, many infective microorganisms require proteases for replication or use proteases as virulence factors, which have facilitated the development of protease-targeted therapies for a variety of parasitic diseases.