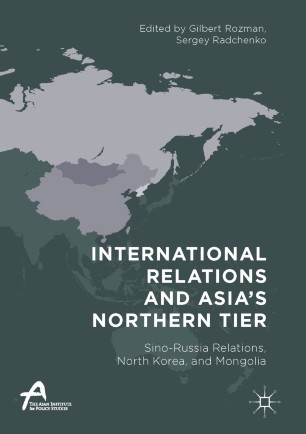 In this new book, noted scholars of Northeast Asia contribute new views on the future of the region. Collecting essays from experts of all 4 countries and their interconnected histories and political orders, the book helps to contextualize the future development of the region in the context of a US "Pivot to Asia." The four countries on the northern fringe of Asia went their separate ways after the end of the Cold War, but strengthening Sino-Russian relations and what may be the looming endgame in North Korea’s strategy of threats and isolation are signs that we now need to think about this area also through its connections.  Looking back to what existed in an earlier incarnation of the Northern Tier and focusing on Chinese and Russian views of North Korea, we are able to explore the implications of increasingly close Sino-Russian relations. The book will be of great value to scholars, policymakers, and all passionate about exploring what's next for Russia and China's relationship.

Gilbert Rozman is an Associate Faculty member at Princeton University's East Asian Studies department. Rozman, Musgrave Professor of Sociology, specializes in Northeast Asian societies: China, Japan, Korea, and Russia. He has compared them, most recently concentrating on national identities. In addition, Rozman works on sociological factors in international relations, emphasizing mutual perceptions and barriers to regionalism.
Sergey Radchenko has an international reputation for research on the history of the Cold War. He has written on Sino-Soviet and Soviet-Japanese relations, atomic diplomacy, Soviet engagement with the Third World, and on Cold War crises. He is a Global Fellow in the History and Public Policy of the Wilson Centre Program, working on China’s Foreign Policy Under Mao Zedong and Zi Jiang Distinguished Professor at East China Normal University.