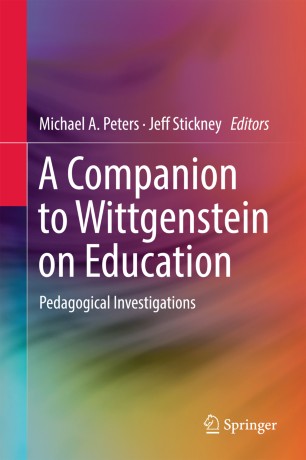 A Companion to Wittgenstein on Education

This book, bringing together contributions by forty-five authors from fourteen countries, represents mostly new material from both emerging and seasoned scholars in the field of philosophy of education.  Topics range widely both within and across the four parts of the book: Wittgenstein’s biography and style as an educator and philosopher, illustrating the pedagogical dimensions of his early and late philosophy; Wittgenstein’s thought and methods in relation to other philosophers such as Cavell, Dewey, Foucault, Hegel and the Buddha; contrasting investigations of training in relation to initiation into forms of life, emotions, mathematics and the arts (dance, poetry, film, and drama), including questions from theory of mind (nativism vs. initiation into social practices), neuroscience, primate studies, constructivism and relativity; and the role of Wittgenstein’s philosophy in religious studies and moral philosophy, as well as their profound impact on his own life.
This collection explores Wittgenstein not so much as a philosopher who provides a method for teaching or analyzing educational concepts but rather as one who approaches philosophical questions from a pedagogical point of view.  Wittgenstein’s philosophy is essentially pedagogical: he provides pictures, drawings, analogies, similes, jokes, equations, dialogues with himself, questions and wrong answers, experiments and so on, as a means of shifting our thinking, or of helping us escape the pictures that hold us captive.

Michael A. Peters is a Professor at the Wilf Malcolm Institute for Educational Research at Waikato University, Emeritus Professor at the University of Illinois at Urbana-Champaign and Professorial Fellow at James Cook University. He is the executive editor of Educational Philosophy and Theory and founding editor of several other journals, including the Open Review of Educational Research and The Video Journal of Education and Pedagogy. His interests are in education, philosophy and social policy and he has written over sixty books, including most recently The Global Financial Crisis and the Restructuring of Education (2015) and Paulo Freire: The Global Legacy (2015), both with Tina Besley. He was made an Honorary Fellow of the Royal Society of NZ in 2010 and awarded honorary doctorates by the State University of New York (SUNY) in 2012 and University of Aalborg in 2015.
Jeff Stickney, Lecturer, University of Toronto, taught graduate courses in Philosophy of Education and courses for Philosophy teachers training in secondary education at the Ontario Institute for Studies in Education.  He is the senior author and consultant on the Grade 12 Ontario text Philosophy: Thinkers, Theories & Questions (McGraw-Hill Ryerson, 2011), building upon his extensive experience of teaching philosophy at Bayview Secondary School (York Re-gion, Ontario). He recently co-supervised a PhD dissertation on Focault in Philosophy of Education at the University of Toronto and is currently serving on a doctoral committee at York University for a dissertation on Wittgenstein.  With Michael A. Peters he co-edited the present volume, and with Nicholas Burbules co-edited the Wittgenstein section in the Encyclopedia of Educational Philosophy and Theory (Springer; Chief editor Michael A. Peters).  Stickney presented at the Nordic Wittgenstein Society (Denmark, 2012), the 2015 PESGB Gregynog Conference 'Orientations Towards Wittgenstein' (Wales), and organized panel discussions on Wittgenstein in 2016 for PES (Toronto) and PESGB (Oxford).