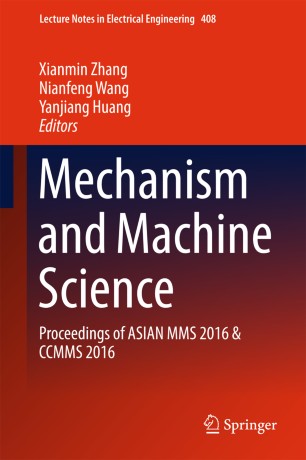 This is the fourth installment in the IFToMM Asian conference series on Mechanism and Machine Science (ASIAN MMS 2016). The ASIAN MMS conference initiative was launched to provide a forum mainly for the Asian community working in Mechanism and Machine Science, in order to facilitate collaboration and improve the visibility of activities in the field. The series started in 2010 and the previous ASIAN MMS events were successfully held in Taipei, China (2010), Tokyo, Japan (2012), and Tianjin, China (2014). ASIAN MMS 2016 was held in Guangzhou, China, from 15 to 17 December 2016, and was organized by the South China University under the patronage of the IFToMM and the Chinese Mechanical Engineering Society (CMES).  The aim of the Conference was to bring together researchers, industry professionals and students from the broad range of disciplines connected to Mechanism Science in a collegial and stimulating environment. The ASIAN MMS 2016 Conference provided a platform allowing scientists to exchange notes on their scientific achievements and establish new national and international collaborations concerning the mechanism science field and its applications, mainly but not exclusively in Asian contexts.