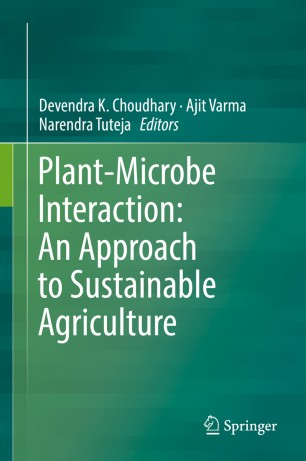 The book addresses current public concern about the adverse effect of agrochemicals and their effect on the agro-ecosystem. This book also aims to satisfy and contribute to the increasing interest in understanding the co-operative activities among microbial populations and their interaction with plants. It contains chapters on a variety of interrelated aspects of plant-microbe interactions with a single theme of stress management and sustainable agriculture. The book will be very useful for students, academicians, researcher working on plant-microbe interaction and also for policy makers involved in food security and sustainable agriculture.

Dr. Choudhary has worked on GOI sponsored major projects as Principle Investigator (PI) wherein recently he worked on two major projects sponsored by DBT and SERB, New Delhi at Amity University until the year 2015 preceded by Mody University and DST FAST-TRACK project at the Department of Biotechnology, Barkatullah University, Bhopal.

As an active researcher, Dr Choudhary has published research and review articles along with several book chapters for reputed journals and edited books. In addition, he has served as PhD supervisor/co-supervisor for several research scholars. Under supervision of Dr Choudhary his scientific team has assigned three accession numbers for bacterial cultures wherein two from MTCC, IMTECH (MTCC, 12057 & 12058) and one with MCC no 2607. Most recently, his team has filed three patents with the India Patent Office, New Delhi. Recently, in association with senior colleagues, Dr. Choudhary has edited book on ‘Microbial-mediated induced systemic resistance in plants’ with emphasis on global food security.

Dr Choudhary has been recognized as Member of The National Academy of Sciences (MNASc)-2016. Besides, he has selected for Indian National Science Academy (INSA) visiting and summer research fellowship-2014. Further, he received Dr RS Rana Memorial best research award in the year 2013, sponsored by the Association of Microbiologists of India. Besides, several other achievements has been credited in his account.