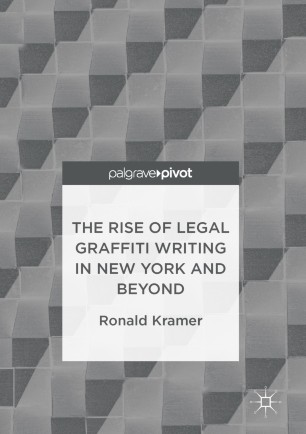 The Rise of Legal Graffiti Writing in New York and Beyond

This pivot analyzes the historical emergence of legal graffiti and how it has led to a new ethos among writers. Examining how contemporary graffiti writing has been brought into new relationships with major social institutions, it explores the contemporary dynamics between graffiti, society, the art world and social media, paying particular attention to how New York City’s political elite has reacted to graffiti. Despite its major structural transformation, officials in New York continue to construe graffiti writing culture as a monolithic, criminal enterprise, a harbinger of economic and civic collapse. This basic paradox – persistent state opposition to legal forms of graffiti that continue to gain social acceptance – is found in many other major cities throughout the globe, especially those that have embraced neoliberal forms of governance. The author accounts for the cultural conflicts that graffiti consistently engenders by theorizing the political and economic advantages that elites secure by endorsing strong 'anti-graffiti' positions.
Dr Ronald Kramer is a Senior Lecturer in Criminology and Sociology at the University of Auckland, New Zealand.