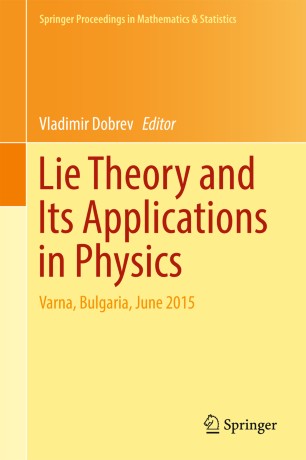 LT: International Workshop on Lie Theory and Its Applications in Physics

Lie Theory and Its Applications in Physics

This volume presents modern trends in the area of symmetries and their applications based on contributions from the workshop "Lie Theory and Its Applications in Physics", held near Varna, Bulgaria, in June 2015. Traditionally, Lie theory is a tool to build mathematical models for physical systems.
Recently, the trend has been towards geometrization of the mathematical description of physical systems and objects. A geometric approach to a system yields in general some notion of symmetry, which is very helpful in understanding its structure. Geometrization and symmetries are employed in their widest sense, embracing representation theory, algebraic geometry, number theory, infinite-dimensional Lie algebras and groups, superalgebras and supergroups, groups and quantum groups, noncommutative geometry, symmetries of linear and nonlinear partial differential operators (PDO), special functions, and others. Furthermore, the necessary tools from functional analysis are included.<
This is a large interdisciplinary and interrelated field, and the present volume is suitable for a broad audience of mathematicians, mathematical physicists, and theoretical physicists, including researchers and graduate students interested in Lie Theory.