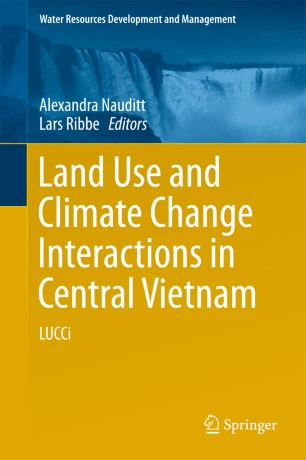 Land Use and Climate Change Interactions in Central Vietnam

This book summarizes the key findings of a five-year interdisciplinary research project funded by the German Federal Ministry of Research and Education (BMBF). It serves as a typical case study for a rapidly growing and developing urban center – Da Nang City, which is surrounded by remote areas characterized by increasing migration and limited development. A number of German and Vietnamese universities and international institutions participated in the project, contributing their particular expertise to assess the data-scarce region under study, two provinces in central Vietnam with a combined area of ca. 12,000 km².

Alexandra Nauditt is an environmental scientist at the Institute for Technology and Resources Management in the Tropics and Subtropics (ITT) whose work primarily focuses on hydrology and river basin management. Her most research has examined hydrological drought assessment at the catchment scale. Since 1999, she has been involved in educational and research projects at the ITT dealing with river basin assessment and management, drought risk analyses, water allocation and stakeholder involvement, as well as interactions between climate variability, hydrology and land use in semi-arid and tropical environments with a regional focus on South East Asia and Latin America. Recently she has coordinated the BMBF-funded research projects “Land Use and Climate Change Interactions in Central Vietnam – LUCCi” and “Water Use Efficiency in Semi Arid Central Chile”.