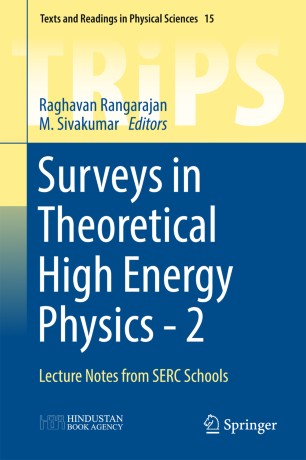 Part of the Texts and Readings in Physical Sciences book series (TRiPS, volume 15)

The book presents pedagogical reviews of important topics on high energy physics to the students and researchers in particle physics. The book also discusses topics on the Quark–Gluon plasma, thermal field theory, perturbative quantum chromodynamics, anomalies and cosmology. Students of particle physics need to be well-equipped with basic understanding of many concepts underlying the standard models of particle physics and cosmology. This is particularly true today when experimental results from colliders, such as large hadron collider (LHC) and relativistic heavy ion collider (RHIC), as well as inferences from cosmological observations, are expected to further expand our understanding of particle physics at high energies. This volume is the second in the Surveys in Theoretical High Energy Physics Series (SThEP). Topics covered in this book are based on lectures delivered at the SERC Schools in Theoretical High Energy Physics at the Physical Research Laboratory, Ahmedabad, and the University of Hyderabad.

Raghavan Rangarajan is associate professor at the Theoretical Physics Division at the Physical Research Laboratory (PRL), Ahmedabad, since 1997. Prior to joining to PRL, he was a student at Princeton University and the University of California at Santa Barbara, and a postdoctoral fellow at the Houston Advanced Research Centre. His areas of research are cosmology and particle physics. He has worked on different subjects in these fields such as dark matter, the matter anti-matter asymmetry of the universe, and the cosmic microwave background radiation.

M. Sivakumar is professor at the School of Physics, University of Hyderabad, India. His areas of interest are field theory, elementary particle physics, theoretical physics, and electromagnetism. He is a Fellow of the Andhra Pradesh Academy of Sciences and the Telangana Academy of Sciences. He was associate member of Abdus Salam International Center for Theoretical Physics, Trieste, Italy.