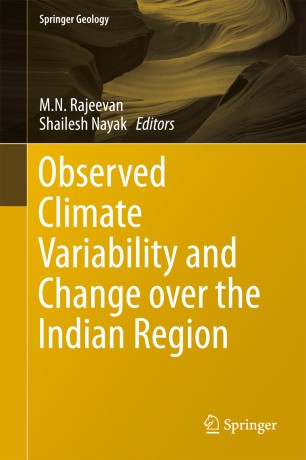 Observed Climate Variability and Change over the Indian Region

The objective of the book is to make a comprehensive documentation of the observed variability and change of the regional climate system over the Indian region using the past observed data. The book addresses all the important parameters of regional climate system so that a physically consistent view of the changes of the climate system is documented. The book contains 16 chapters written by the subject experts from different academic and research institutes in India. The book addresses all important components/parameters of the climate system, like rainfall, temperature, humidity, clouds, moisture, sea surface temperature and ocean heat content, sea level, glaciers and snow cover, tropical cyclones and monsoon depressions, extreme rainfall and rainstorms, heat waves and cold waves, meteorological droughts, aerosols, atmospheric aerosols, ozone and trace gases and atmospheric radiative fluxes. One chapter deals with the past monsoon using monsoon proxy data. The last chapter deals with the future climate change projections over the Indian region (rainfall and temperature) made using coupled climate models.

Most of the analyses (especially on rainfall, temperature, extreme rainfall, sea surface temperature, meteorological droughts) are based on the data for a longer period of 110 years, 1901–2010. For some other parameters like moisture, clouds, heat waves and cold waves, atmospheric aerosols, ozone and trace gases and radiative fluxes, data of shorter period have been used. The articles documented inter-annual and decadal variability in addition to documenting long term trends of different parameters. The trends have been tested for statistical significance using standard techniques.

It is expected that the present book will be an excellent reference material for researchers as well as for policy makers. These results will be useful in interpreting future climate change scenarios over the region being projected using coupled climate models. Further analysis of these results is required for attributing the observed variability and change to natural and anthropogenic activities.

Dr. M. Rajeevan Nair is at present working as the Secretary, Ministry of Earth Sciences, Government of India at New Delhi. He has more than 30 years’ research and operational experience in many aspects of Tropical Meteorology. He has experience as an operational forecaster as well as a researcher. His main research contributions include understanding monsoon variability and development of monsoon prediction models, understanding extreme weather events like heavy rainfall and heat waves and cloud-radiation interaction. He had served in many international expert panels of WMO/WCRP including as a member of the Asian–Australian Monsoon Panel. He briefly served as the High-Level Adviser to the Commission for Climatology, WMO.

Dr. Shailesh Nayak is the Former Secretary, Ministry of Earth Sciences. He did his Ph.D. in Geology in 1980 from the M.S. University of Baroda, and specialized in Oceanography and Remote Sensing. Initially, he has served in Indian Space Research Organization (ISRO) and worked on research areas of coastal and ocean processes and ocean-atmosphere interaction, coastal geomorphology, and hazards. He has also served as the Director, Indian National Centre for Ocean Information Services, INCOIS, Hyderabad, where he has set up a state-of-the-art Early Warning System for Tsunami and Storm Surges in the Indian Ocean. He has been providing leadership for the programs related to science of climate change, weather services, polar science, ocean science and modelling, ocean survey, resources, and technology. He has published more than 100 papers in journals, conferences and reports. He was honoured with an Honorary Doctorate of Science by Andhra University in 2011 and Assam University in 2013.