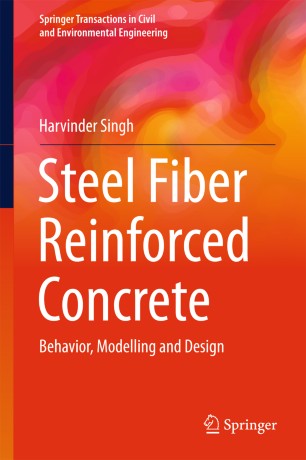 This book discusses design aspects of steel fiber-reinforced concrete (SFRC) members, including the behavior of the SFRC and its modeling. It also examines the effect of various parameters governing the response of SFRC members in detail. Unlike other publications available in the form of guidelines, which mainly describe design methods based on experimental results, it describes the basic concepts and principles of designing structural members using SFRC as a structural material, predominantly subjected to flexure and shear. Although applications to special structures, such as bridges, retaining walls, tanks and silos are not specifically covered, the fundamental design concepts remain the same and can easily be extended to these elements. It introduces the principles and related theories for predicting the role of steel fibers in reinforcing concrete members concisely and logically, and presents various material models to predict the response of SFRC members in detail. These are then gradually extended to develop an analytical flexural model for the analysis and design of SFRC members. The lack of such a discussion is a major hindrance to the adoption of SFRC as a structural material in routine design practice. This book helps users appraise the role of fiber as reinforcement in concrete members used alone and/or along with conventional rebars. Applications to singly and doubly reinforced beams and slabs are illustrated with examples, using both SFRC and conventional reinforced concrete as a structural material. The influence of the addition of steel fibers on various mechanical properties of the SFRC members is discussed in detail, which is invaluable in helping designers and engineers create optimum designs. Lastly, it describes the generally accepted methods for specifying the steel fibers at the site along with the SFRC mixing methods, storage and transport and explains in detail methods to validate the adopted design. This book is useful to practicing engineers, researchers, and students.