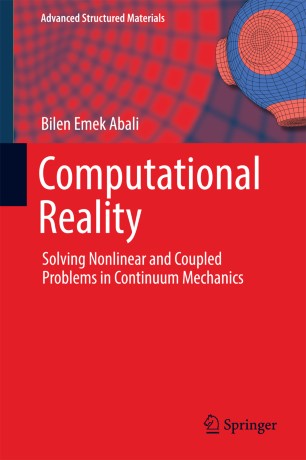 This book presents the theory of continuum mechanics for mechanical, thermodynamical, and electrodynamical systems. It shows how to obtain governing equations and it applies them by computing the reality. It uses only open-source codes developed under the FEniCS project and includes codes for 20 engineering applications from mechanics, fluid dynamics, applied thermodynamics, and electromagnetism. Moreover, it derives and utilizes the constitutive equations including coupling terms, which allow to compute multiphysics problems by incorporating interactions between primitive variables, namely, motion, temperature, and electromagnetic fields.
An engineering system is described by the primitive variables satisfying field equations that are partial differential equations in space and time. The field equations are mostly coupled and nonlinear, in other words, difficult to solve. In order to solve the coupled, nonlinear system of partial differential equations, the book uses a novel collection of open-source packages developed under the FEniCS project. All primitive variables are solved at once in a fully coupled fashion by using finite difference method in time and finite element method in space.