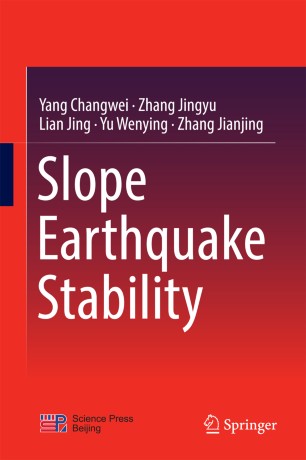 This book begins with the dynamic characteristics of the covering layerbedrock type slope, containing monitoring data of the seismic array, shaking table tests, numerical analysis and theoretical derivation. Then it focuses on the landslide mechanism and assessment method. It also proposes a model that assessing the hazard area based on the field investigations. Many questions, exercises and solutions are given. Researchers and engineers in the field of Geotechnical Engineering and Anti-seismic Engineering can benefit from it.

Dr. Yang Changwei was graduated from the Department of Civil Engineering, Southwest Jiaotong University in 2014. His major is Geotechnical Engineering. He is a Member of the Chinese Society for Rock Mechanics. Dr. Yang Changwei is interested in Geotechnical Engineering as well as disaster prevention and reduction for high-speed railways and highways. He has authored over 50 papers published in peer-reviewed journals, authorized four sets of software copyrights, was the leader author of three sets of Chinese standards, and published three books in Chinese presses. He also won the Liu Huixian Earthquake Engineering Scholarship Award in 2013 that only eight doctors in the world have won, the Si Shi Yang Hua Medal which is the blue ribbon in the Southwest Jiaotong University, the Progress Prize from Chinese Railway Institute of Science and Technology in 2012, the "2015 National excellent Doctoral Dissertation Award of Chinese Journal of Rock Mechanics and Engineering Society", and so on.
Professor Zhang Jianjing has been working in the field of seismic stability of slope for thirty years. He has won some important awards, such as the Scientific and Technological Progress Award from Sichuan province, the Scientific and Technological Progress Award from Chinese Highway and Transportation Society, the Scientific and Technological Progress Award from Chinese railway society.